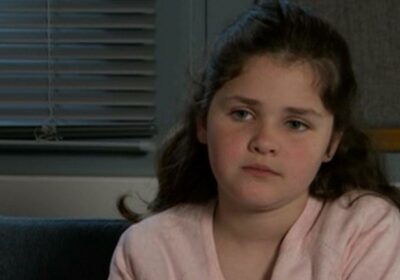 Former Coronation Street couple Fiz Brown and Tyrone Dobbs are reeling after learning their daughter Hope could face prison for her recent crime.

The 10-year-old schoolgirl deliberately started a fire at Tyrone and girlfriend Alina's flat, unaware that anyone was inside.

Alina (Ruxandra Porojnicu) was rushed to hospital and sadly suffered a miscarriage, leaving her and Tyrone (Alan Halsall) distraught.

Hope had a scarily unapologetic response, saying: "It doesn't matter about the cot now there's no baby to put in it. Sorry, not sorry."

This led to a shattered Tyrone telling the police it was her who sparked the blaze. During Wednesday's episode of the ITV soap, the child spoke with police as they tried to establish whether she knew right from wrong.

As the conversation turned to the fire, she showed no empathy for what she had done or for the loss of Alina's unborn baby.

Although Hope (Isabella Flanagan) insisted she did not mean to endanger life it was revealed that her admission would mean Hope was charged for the fire in some way. Fiz (Jennie Mcalpine) and Tyrone were alarmed that Hope could end up going to court, and that could lead to the youngster facing 8-12 years in custody

But it was now up to the police and the youth offending team to discuss how to go about a charge, and the level of charge.

Now some Corrie viewers are convinced that Hope will be leaving the show. One fan tweeted: "I’m already imagining how bad Hope is going to be when she comes back to the street after her prison."

Another viewer added: "What you betting Hope gets banged up and Tyrone bins Alina off for Fiz again? Absolute shocker."

Meanwhile a third asked: "Who thinks Hope will go to young offenders then turn up again in 3 years time with a new head?"

Not everyone agreed though, with one viewer writing: "Give over a 10 year old getting 8-12 years for starting a fire."

Another said: "That is absolutely ridiculous. She will not get 8- 12 years fgs and there won’t be a trial because she’s admitted it."

No matter what happens, considering Hope's father was murderer John Stape, we think the good folk of Weatherfield should hide their matches for the foreseeable.