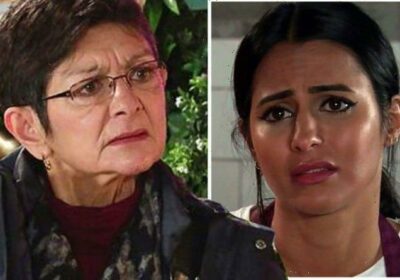 Yasmeen (played by Shelley King) is currently unaware Zeedan Nazir (Qasim Akhtar) and Alya Nazir (Sair Khan) have been hiding a deadly secret from her. Before Christmas, they had an argument with Hashim (Vincent Ebrahim) after he set fire to the Speed Daal restaurant and made threats against the family and this ultimately resulted in him departing from Coronation Street. Although they didn’t kill him, they didn’t ring for help and watched him die so they wouldn’t have to deal with him anymore. As their grandmother discovers the truth in upcoming scenes on the ITV soap, her conscience could see her betray them as she decides the police must know what the brother and sister did.

The drama begins next week as Alya tells Ryan Connor (Ryan Prescott), who was complicit in the cover-up of the death, she’s worried Zeedan will tell Hashim’s daughter Marrium Nazir (Kiran Landa) about what they did.

As Yasmeen’s granddaughter continues to fret, her brother and former lover decide to buy a new dishwasher with the dirty money Hashim gave them.

With both the brother and sister dangerously close to exposing the truth in different ways, their grandmother is still completely unaware of what’s going on.

Spending more time with her friend Stu Carpenter (Bill Fellows), the Nazir matriarch offers him a full-time job at the restaurant.

Also, she offers him a room at the family household to get him off of the streets but when she goes to clear out the room, she makes a shocking discovery.

With Yasmeen more dubious than ever, Alya tells her brother it’s time they tell their grandmother the truth about what happened.

As she explains to her grandmother how Hashim forced Zeedan to launder dirty money, the matriarch is left angered her grandchildren were harbouring such a secret.

What adds fuel to the fire is when Yasmeen discovers her grandson had a hand in the fire which almost cost them their livelihoods and almost killed her friend Stu.

However, she has to try and keep it together as she gives a speech at the relaunch of Speed Daal and emphasises the importance of family values and respect.

Weighing heavy on her shoulders, the grandmother thinks over her words and decides she must disown Zeedan and Alya if she is to remain grounded.

I hope Yasmeen and Stu get together

When Marrium finds out about Yasmeen’s actions towards her grandchildren, she wonders what possibly could have happened for the grandmother to do such a thing.

Zeedan refuses to tell her and seeing this as a rejection, she tells him she won’t give their marriage another chance if he cannot be honest.

Knowing he has to tell the truth, Zeedan speaks to his sister about confessing as he doesn’t want to lose his wife having only just been reunited with her.

Alya says in no uncertain terms if he tells Marrium the truth, he will risk losing his whole family in the process.

It’s not been revealed what he will do but the young man suggests using the rest of Hashim’s dirty money to find somewhere to live.

Alya is unconvinced as she knows the death of Hashim will follow them wherever they go but then a tragedy strikes on the cobbles.

Young schoolboy Joseph Brown (William Flanagan) goes missing from his home and a collection box is dropped off in Speed Daal to help the appeal.

It’s not long before Ryan informs the Nazir siblings a donation of £30,000 has been made to the appeal from an anonymous donor.

Zeedan and Alya both suspect their grandmother of using the dirty money from Hashim to contribute to the reward fund but now it’s been given, they can’t take it back.

As they feel their backs up against a wall, they could be further shocked to discover Yasmeen has also reported them to the police.

Even though she is the last remaining parental figure in their lives, Yasmeen can’t justify the pair walking free when they had a hand in a man’s death.

She knows it will be an unforgivable betrayal but she wouldn’t be able to live with herself if the authorities were not told.

The matriarch could also think because they didn’t actually kill him, they will get a lighter sentence.

However, when the police add up all the criminal behaviour Zeedan got himself involved in, he could be going down for a lot longer.

Will Yasmeen’s grandchildren ever be able to forgive their grandmother for what she has done or will they understand why she had to do it?

Fans of the show might not turn against her as they have been sharing their admiration for the beloved character on Twitter.

Sulagna wrote on the social media platform: “Yasmeen has a quiet dignity about her that is very beautiful #Corrie.”

“I hope Yasmeen and Stu get together. Yasmeen deserves a nice guy, after all, she went through with Geoff #Corrie,” they continued.

Owen shared: “Oops Stu unintentionally upsetting Yasmeen, I am here for a friendship between them although I feel like something bad is going to happen to Stu #Corrie.”