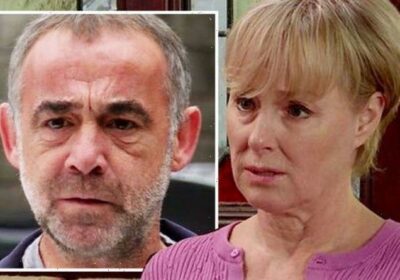 Sally (played by Sally Dynevor) has been feeling neglected by her husband Tim Metcalfe (Joe Duttine) recently on Coronation Street, unaware he is hiding a very serious health prognosis from her. With no intel on her spouse’s triple heart bypass, the mother of two simply thinks he has gone off her and doesn’t find her attractive anymore. So as one thing leads to another on the ITV soap and Kevin (Michael Le Vell) pays her a bit of attention, she could find him irresistible. Is the beginning of a scandalous new love affair on the cobbles which could have life-changing consequences?

In scenes set to air during Monday night’s double-bill of the weeknight serial drama, Sally will be seen talking to Kevin in the Rovers Return.

The mother of two will explain to her ex-husband how she was told Tim was buying her a bouquet of flowers last week but she never received them.

This has led her to believe he is having an affair with a local Weatherfield resident as he has fallen out of love with his wife.

Instead of supporting his ex-wife’s theories, Kevin urges her to speak with her husband about what he’s hiding from her.

Unfortunately, this only causes Sally to take drastic action in another way as she ends up installing a tracking device on Tim’s phone.

Although Kevin is supportive to begin with, he could soon start feeling neglected by his wife, Abi Franklin (Sally Carman) as he realises she is hiding something from him.

What the mechanic doesn’t realise is his wife slept with Imran Habeeb (Charlie De Melo) last year and suspected she was pregnant around New Year.

Despite finding out she was pregnant with her secret lover’s child, the troubled character could still be acting shady around her husband.

Feeling unloved and having built up a connection with his ex-wife in recent scenes, Kevin could try his luck at reigniting their spark.

It was he who wrecked their marriage all those years ago when he cheated on Sally with Molly Dobbs (Vicky Binns) and they had a son together.

Sally was unable to move past his betrayal and so they subsequently got a divorce and began building relationships with other people.

However, with their new romances in danger of being destroyed, they could be the ones to strike the blow rather than talk to their respective partners about their troubles.

Having slept together, the pair could feel old feelings rising back to the surface as they realise there is something deeper going on.

By the end of this week, Sally will discover Tim has been suffering with a major health issue and she could be left devastated knowing she betrayed him in the worst way possible.

As quick as it started, the iconic character could cut short her affair as she commits to helping her husband through his health crisis.

But will the truth ever be revealed about Sally and Kevin’s dalliance or is it a secret they will hope stays buried?

The actress who plays the mother of two, Sally, has spoken about her character turning to Kevin in her hour of need.

Sally explained: “She is at the end of her tether and confides in Kevin. Kevin tells her she needs to speak to Tim rather than jumping to conclusions.”

There is a lot that could be said about the iconic character turning to her ex-husband at such a turbulent time in her life.

The soap star went on to discuss how Tim’s actions, regardless of why he’s done them, has built up a level of distrust in their relationship.

Sally added: “The issue is here that Tim has kept things from her before and she has forgiven him. But she really can’t understand why he wouldn’t tell her about this and that is going to be hard for her to cope with.

“It might help that he hasn’t told other people close to him too like Faye and Elaine but he has told a lot of other people which makes her feel embarrassed.

“He was doing it for the right reasons but she can’t really see that at the moment,” the actress continued, dropping another hint Sally could betray Tim.

“There are all sorts of emotions going through her head, she is scared and feels guilty but also hurt, angry and confused about why he hadn’t told her.

“What does that say about their relationship that he has kept it from her?” the soap star explained so could this be the end of one of the show’s most beloved couples?

Speaking with Express.co.uk and other press, executive producer Iain MacLeod hinted there would be trouble on the horizon for the love birds.

The show boss explained: “We’re dragging an incredibly prevalent issue out into the daylight and pointing the camera at it.

“Some people might find the subject matter a bit awkward but it’s incredibly potent in that family.

“What starts off small ends up being this colossal threat to what Tim and Sally think they know about each other, themselves and the nature of their relationship and what that might look like for the rest of their lives together.

“It’s massive,” he added so could Sally be beginning an affair with Kevin very soon?