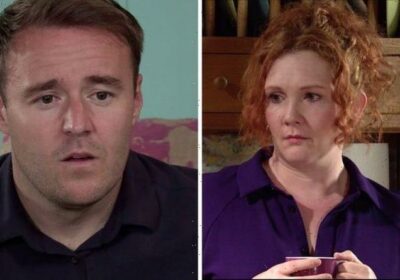 Since the break up, Coronation Street favourite Fiz (played by Jennie McAlpine) has had to accept her ex having a baby with Alina, then find out that they tragically lost the baby – potentially at the hands of her troubled daughter Hope Stape (Amelia Flanagan). Tyrone (Alan Halsall) initially helped Fiz and Hope go on the run to avoid the schoolgirl getting into real trouble for setting fire to his home. Upcoming scenes of the ITV soap will see Fiz and Tyrone engage in a heart-to-heart, and when alcohol is added to the mix, the old flames might find their feelings for one another return to the surface. It’s possible Fiz could end up pregnant, which is bound to make things on the Street more explosive than ever.

Alina (Ruxandra Porojnicu) has been left heartbroken by the loss of her unborn child following the fire she was caught up in.

Tyrone was also upset, but his sadness turned to fear quickly once he found out Hope had started the fire.

Torn about what to do, mechanic Tyrone agreed to allow Fiz and Hope to flee.

But he soon realised things wouldn’t work out smoothly, and persuaded his ex to come back to Weatherfield.

The pair agreed that Hope needs help, but Fiz ended up being arrested after Alina told the police to investigate her again after becoming suspicious of her lies.

Once Alina found out the truth after Tyrone had no choice but to explain, she was furious.

On Friday’s episode, a conflicted Tyrone tried to convince Alina he had tried to do the right thing.

“She was jealous of the baby,” he said.” She only meant to destroy the cot, she had no idea that you were in there.

“I guess it was her way of telling us how she felt.”

Alina replied: “You’re saying your 10-year-old daughter took my keys, broke in to steal back a cuddly toy then set fire to the flat as some kind of cry for help?

“Do you even know how crazy that sounds?” Tyrone replied: “Yes, and I wish it wasn’t true.

“But it is.” When Alina questioned whether Fiz could be lying, Tyrone was quick to defend her.

“She wouldn’t do that,” he stated. Alina asked: “How can you be sure? What is it with her? Why is it easier to believe that your daughter is some kind of psycho than it is to believe her mum is?”

After he suggested that the fire may not have been the cause of the miscarriage, Alina snaps: “Don’t you dare. Stay away from me – we are done.”

Friday’s episode ended with police informing Tyrone that Fiz had admitted to starting the fire.

Next week, he faces a difficult choice as he realises he needs to talk to the police about Hope.

In episodes set to air next week, the devastated parents prepare for Hope’s sentencing when he drops a huge bombshell – he and Alina are engaged, although the proposal was accidental on Tyrone’s part.

Fiz is devastated and feels foolish for thinking Tyrone and Alina were over.

In upcoming scenes, Tyrone shows up to Fiz’s after a stressful day and expresses his regret at destroying everyone’s lives.

As he dissolves into tears, Fiz comforts her former partner.

She’s shocked to realise that he isn’t happy, and the pair get talking.

When a bottle of prosecco is opened, things get more interesting between the two.

As they continue drinking, it’s likely the pair could end up sleeping together as old feelings resurface.

As if this isn’t bad enough for Alina, Fiz could end up pregnant, adding insult to injury to the heartbroken woman.

But will the couple even tell Alina the truth? Fiz had been seeing another man lately, so she could end up lying that the baby is his.

However, the truth often has a way of coming out in the Street, and it’s bound to be revealed sooner or later.

There’s been plenty of drama on the cobbles lately involving the three – and it seems there will inevitably be more to come.

Coronation Street continues on Monday at 7.30pm on ITV.