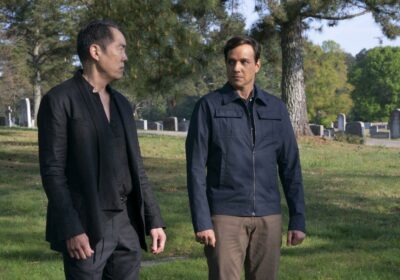 Cobra Kai fans are waiting patiently for season 5 and accepting any hints we can get. We don’t want any spoilers, but we’re all excited to see what’s next for Johnny Lawrence (William Zabka), Daniel LaRusso (Ralph Macchio), and all the new Karate kids. The creators of the series are good about hyping up the new season without revealing too much.

[Warning: This article contains spoilers for the first four seasons of Cobra Kai.]

John Kreese actor Martin Kove interviewed Cobra Kai creators Josh Heald, Jon Hurwitz, and Hayden Schlossberg for his podcast Kicking It With the Koves on April 13. At the end, Kove’s son Jesse asked the guys about season 5. Without plot specifics, Heald revealed how Cobra Kai Season 5 would still be different.

Why is ‘Cobra Kai’ Season 5 the ‘most untraditional season’?

Cobra Kai Season 5 wrapped filming before season 4 even premiered on Netflix. While Netflix has not set a premiere date, Cobra Kai Season 4 left a number of cliffhangers for Kreese, Daniel, Johnny, Miguel (Xolo Maridueña), Tory (Peyton List), and more. Heald teased that those aren’t going to pay off the way you think.

“It’s probably our most untraditional season yet in terms of what we’ve set up vs. what we’re paying off,” Heald said on Kicking It with the Koves. “It’s explosive as usual and it’s a season we’re really proud of.”

So, Daniel called in Chozen (Yuji Okumoto) from Okinawa to help beat Cobra Kai. Terry Silver (Thomas Ian Griffith) had Kreese arrested. Miguel went to Mexico to look for his father. Tory found out Silver bribed the All-Valley Karate Tournament judges. But whatever you think is going to happen is probably not what season 5 is actually about.

“Season 5 is going to surprise a lot of people, I’ll just say that,” Heald said. “In terms of theories and what could happen, there are some obvious things that we’ve laid out at the end of season 4 that can start connecting some dots and saying I think this then this. But I’ll be shocked if people really put the full picture together of what we did with season 5.”

At PaleyFest on April 8, the Cobra Kai Kompanion podcast caught up with Ralph Macchio and William Zabka. Asked about Cobra Kai Season 5 there, Zabka talked about the new season in ways that are compatible with Heald’s description.