When Cobra Kai‘s fist-throwing, hell-raising karate students head back to the dojo, there’s going to be one empty spot on the mat.

Season 3 of the Karate Kid sequel series returns Friday, Jan. 1 (all 10 episodes, Netflix), but as Cobra Kai and Miyagi-Do deal with the aftermath of the violent brawl that left Miguel hospitalized, Nichole Brown’s Aisha will be noticeably absent.

Brown initially broke the news of her exit in an Instagram story in September 2019 writing, “Officially NOT in Season 3 of #CobraKai… Unfortunate, but thank you for the opportunity and time I had on the show.”

In an interview with TVLine, executive producer and co-showrunner Jon Hurwitz confirms that Aisha will be MIA this coming season, with the character’s vanishing act explained in the premiere. 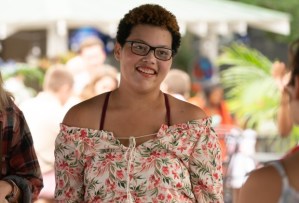 “We love Aisha and we love Nichole Brown,” he states, before hinting that the character could return in later seasons. Hurwitz points to other West Valley High School students (and one dim-witted, but well-intentioned cousin) who were written out, but will be returning in Cobra Kai‘s third act.

“Certain characters we loved in Season 1 didn’t appear at all in Season 2, like Kyler, Yasmine and Louie,” says Hurwitz. “Before the season, we told Nichole the same thing we told those actors: That just because a character doesn’t appear for a period of time doesn’t mean they’ve left the universe, that they can’t return again. We love that character, and perhaps we’ll see her again one day.”

Adds fellow EP/co-showrunner Josh Heald: “We have a long story left to tell. We tend to look at the show in a very long view, where entrances and exits are impactful and important. Sometimes people need to exit to make their [re-entry] a little bit different and bigger.”

Disappointed Aisha is sidelined for Season 3? Hope she’ll return one day? Tell us your thoughts in the Comments below!