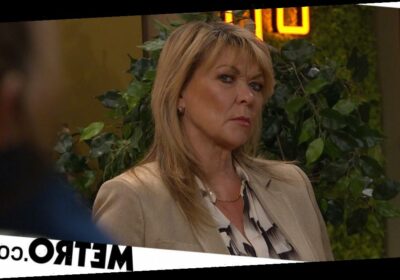 Claire King has warned Emmerdale viewers that Kim Tate is ‘set to get worse’ over the coming weeks.

The actress spoke about Kim ‘getting away with murder’ on the ITV show, and teased upcoming storylines during an appearance on Lorraine.

‘I’ve seen the scripts that are coming up in the future and yes, she is definitely getting worse,’ the 58-year-old told host Lorraine Kelly.

‘She’s just she’s OTT. She says all these things that you wouldn’t dream of saying to anybody in real life,’ Claire said about her character.

‘She gets away with murder, literally. So it’s great. You go to work and come back and you’re all chilled, because you’ve got all that angst out there.’

It was recently revealed that Kim will be at the centre of a new long-running storyline which could ‘last years’.

Kim becomes embroiled in a power struggle, as she takes manipulative Gabby Thomas (Rosie Bentham) under her wing.

Claire also teased that Kim could become a grandmother again, saying she’s looking to ‘take control’ in the coming weeks.

‘There’s something that happens in the story as well where Kim possibly is becoming a grandmother again,’ the actress said.

‘So this time, Kim wants to manipulate it. So she’s got total control from day one, unlike when Millie was born and she hadn’t seen her for about five years. So this is a chance for Kim to actually build her Empire and her dynasty.’

Speaking about Kim’s power dynamic with Gabby, Claire previously told Metro.co.uk: ‘She has another ally, or so she thinks. She sees Gabby is bright, absolutely. That is why she takes her on – if she thought she was dim she wouldn’t.

‘She also senses her edge – she’s not just intelligent she has a little dangerous side and I think Kim likes that but that could be to her detriment at some point. Gabby has a tough side we haven’t seen.’

Emmerdale continues at 7pm on ITV.