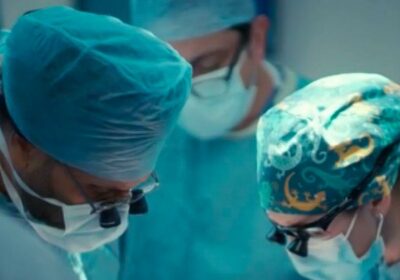 The series takes viewers inside the Major Trauma Centre at Royal Stoke University Hospital and follows their critical work as they rush to save patients from catastrophic and potentially life-threatening injuries.

Viewers saw Press Setter Operator Simon Wright raced in after a sheet of industrial metal slams had sliced through his face under hydraulic pressure.

The accident left him with devastating and potentially life-changing facial injuries. Emergency Medicine Consultant And Trauma Team Lead Dr Anthony Taylor can be seen leading his team of NHS doctor’s in a desperate bid to save his face.

Viewers reacting to the gruesome scenes, as surgeons begin operating on his badly damaged eye.

“How amazing is our NHS, watching with my hands over my eyes..xx,” said one viewer.

A second agreed: “Watching #999CriticalCondition and I’m just in awe of the amazing surgeon’s. That’s when I have removed my hands to see the injuries.”

“Watching things like #999CriticalCondition just shows how amazing our NHS is,’ added a third, while a fourth said: “Crikey this face surgery is gruesome….But staggering skill by the surgical team.”

Recalling the harrowing situation, Simon told the Daily Star: "I don't actually remember the accident itself.

"But things have been pieced together to a certain degree for me. So to my understanding, I was bending a piece of work, or possibly even taking a little bit of a bend out of a piece of work. I'm not 100% Sure.

"So the piece of metal just snapped from my understanding, just at the wrong place at the wrong time, I suppose."

Speaking about the damage to his face, he added "I’m not sure how many breaks there were but I know, there’s no eye-socket, no cheekbone and they’ve all been replaced with plates.

"The jaw I think has got two plates holding it together. The scalp where they obviously had to do brain surgery, they took the top of the scalp off and I think that’s held together by eight plates.

"My nose has been rebuilt and I think there’s a couple of plates on the right hand side of my forehead.”

Commending surgeon's who had worked tirelessly on his face, he commented: "I can’t get over the job they’ve done, it’s not my original face, it’s not but it’s not too bad, it’s alright.