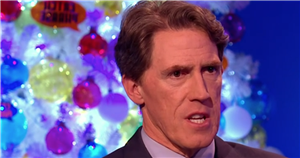 Viewers of ITV's Catchphrase Celebrity Special were left fuming on Sunday after actor Rob Brydon appeared to be talking far too much for their liking.

The Gavin and Stacey star appeared on the programme with hopes of winning big for his charity, but Rob seemed to rub viewers up the wrong way with his constant chat and attempts of cracking jokes when the cameras were focused on him.

Taking to Twitter, irritated fans shared their displeasure regarding the star's ongoing commentary.

One fan penned: "Time to turn it over I think, Rob is unbearable."

Another questioned: "Rob, you do know you can just simply give the answer without a long-winded speech, right?"

A third added: "Come on Anne, Rob is just wasting time with his chit chat."

"I really like Rob Brydon but f**k me, he’s doing my head in on #catchphrase," a fourth viewer added.

Rob appeared on the celebrity show alongside dancer Perri Kiely and The Chase star Anne Hegerty.

Brainbox Anne certainly captivated viewers and fans were loving the fact that she was able to make it straight into the final round.

Taking to Twitter, one spectator wrote: "Omg @anne_hegerty you were absolutely incredible on @Catchphrase and you absolutely smashed it! Way to go Anne! You were just as bloody incredible as Jenny. Super proud of you Anne and for such a great cause too which is very close to my heart."

Another impressed viewer penned: "I love @anne_hegerty so much! She seems like the kindest and sweetest person ever x."

While a third shared: "Anne 'Superstar' Hegerty! Proud of you! Doing the Chasers proud, too!"

But the compliments didn't stop there for Anne, as she went on to win an incredible £25,000 for her charity.

As well as appearing on Catchphrase, Anne also made an appearance on The Chase celebrity special on Sunday too.

Dressing up in Halloween attire, Anne impressed viewers despite some who were confused by her outfit during the festive season.

Meanwhile, another added: "Me still trying to figure out why Anne is dressed as Morticia for a CHRISTMAS special?!"