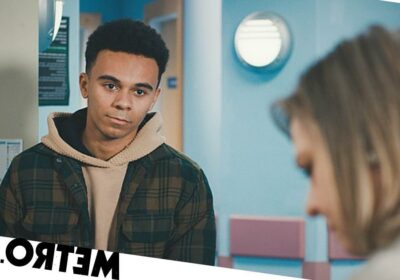 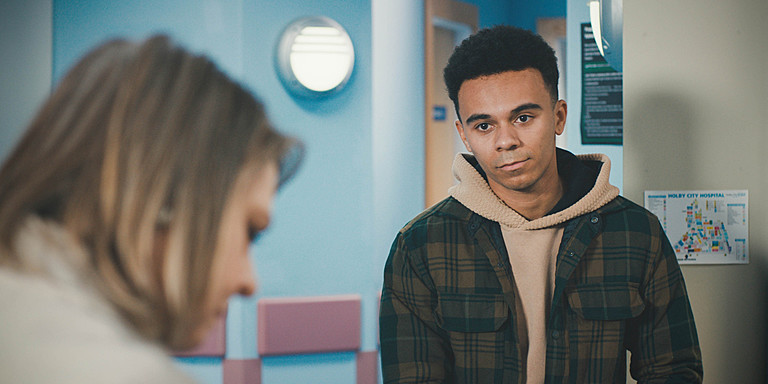 After paramedic Teddy Gowan (Milo Clarke) discovered he had a heart condition in a recent Casualty episode, it looked like he would have to give up the job he loved. In tonight’s episode he visits the Holby ED for one last time to hand in his resignation, before he moves to Manchester to live with his mum, Gaynor (Maxine Evans).

Teddy is sad to be leaving, particularly because his colleagues seem to have forgotten about him already and haven’t been in touch. Jan says she doesn’t want to accept his resignation as he clearly still loves the job.

The only person who seems happy about him going is Gaynor, who hated him being a paramedic and getting into dangerous situations. She was constantly at loggerheads with her sister Jan (Di Botcher) over Teddy’s career choice, with Jan accusing her of being smothering and over-protective and Gaynor saying that Jan didn’t care about Teddy’s safety. But has Gaynor been keeping something from her son?

When Teddy sees Iain (Michael Stevenson) and Sah (Arin Smethurst) bringing a patient in, he recognises a familiar face. Al (Stevie Raine) is the man who was living in the woods that Teddy helped to treat previously, and this time he’s brought in with a serious wound to his face. Teddy can’t help but get involved again – and once again ends up in danger.

Coming up on #Casualty

Meanwhile Stevie (Elinor Lawless) is busy trying to build a case to defend herself against Matthew (Osi Okerafor)’s allegation of sexual harassment but she shocks Faith (Kirsty Mitchell) by refusing to get the advice of a union rep.

When Holly (Simone Saunders), the HR person who’s investigating Matthew’s claims, comes to the ED as a patient, can Faith turn the situation to Stevie’s advantage?

And a young woman (Ellie-May Sheridan) is faced with a moral dilemma when she realises her brother (Ryan Nolan) was behind a brutal attack. Will she decide to stand by him by covering up what he did?