'Casablanca Beats' Review: An Infectious Ode to the Joy of Musical Performance [Cannes] 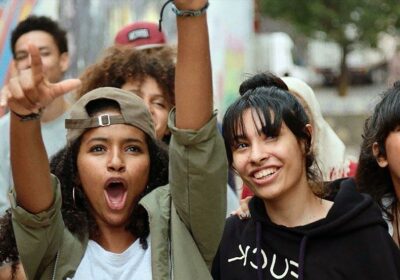 There’s much to love about Nabil Ayouch’s Casablanca Beats. It’s both accessible and groundbreaking, an audience pleaser that manages to be politically astute. Its infectious energy drives its conventional story in pleasing ways, but by giving voice to those often silenced, it proves all the more powerful.

Set in the Sidi Moumen neighborhood of Morocco’s largest city, this tough area is a hotbed of religious extremism and poverty. We see Anas (played by the deep-voiced Ana Boasbousi) driving the streets, listening to pounding music on his car radio while seeking out the local arts center. After finally setting up shop and tagging the walls for good measure, he begins to introduce to a group of young people both the history and the power of rap to elicit both musical expression and political change.

Thus begins a tale that owes much to the likes of School of Rock or Goodwill Hunting, audience favorites where teachers bring out the best in their students to fittingly cathartic results. Yet thanks to the milieu in which Ayouch’s film is set, the stakes feel much higher, with the penalty for expressing honestly fraught with potential repercussions. While speaking truth to power in the Bronx is one things, speaking frankly about suicide bombers, being accosted on the street for dressing as one wishes, or simply navigating both family and clerical restrictions, raises the stakes in some ways even further.

With a charming cast of young performers that provide the right mix of precocious musical zeal along with extremely believable conversations about the nature and challenges with their community, this is a tale where both the lyrical expression as well as the dialogue fuses to create an atmosphere of inclusion. While the storylines are as conventional and repetitive as the musical elements that making up the backing tracks for the rhymes, it’s all assembled with the care of the finest DJ, mixing and matching gently comedic, kids-being-kids moments with a strikingly effective rumination upon life in the region.

The end result is that rare alchemy, where something can ply with the tools of mainstream, audience-friendly cinema but inject enough powerful ideas to elevate it to something extraordinary. Questions of decency, of the nature of speaking about religion, about the paradoxes of a spirit of peace with a compunction for conflict, are all addressed in ways that feel both naturalistic and vital. Even their dance movements feel both liberating and like a call to action, with one memorable moment showing a clothesline feeling like both the wire topping the walls of a prison and a telephone wire to spread the movement to the outside world.

Boasbousi is terrific, always managing to maintain a specific level of aloofness that captivates students and the audience alike. The kids easily could have felt mere stereotypical tropes, but each is given their own moments to shine, especially when the storyline briefly travels back to their home environments.

Yes, the film relies upon an idealized version of this situation, with the fictional art school a clear stand-in for the director’s own perspective of what one wishes for versus what’s already taking place. Still, the film itself may well serve as a springboard for further liberation of ideas and embracing of different perspectives, using the mode of hip-hop expression to jostle Morocco into an even more liberalized version where personal expression and liberty of thought is celebrated rather than silenced.

Casablanca Beats drums its ideas loudly and effectively. The result is a boisterous and crowd-pleasing delight, showing a community with deep specificity that nonetheless speaks to the concerns of young people all over the world. By taking the musical and lyrical tools developed on the streets of New York to the alleyways and rooftops of Sidi Moumen, Ayouch’s film unabashedly embraces a global vision for the need for expression, illustrating both the pure joy of musical performance as well the powerful stories that his committed cast are able to share.