Carol Kirkwood waves arms in panic after Dan Walker suggestion: ’No, no, don’t!’ Carol Kirkwood has been up and down the country so far this week as she brings the latest weather forecast to BBC Breakfast viewers. Today, Carol set up shop at the Tower of London as she spoke with Dan Walker and Louise Minchin about the chilly conditions set to take hold of the UK in the coming days. But after she impressed the presenting pair with some historical facts, Dan suggested he’d be testing her on her knowledge, prompting Carol to wave her arms in a state of panic.

After she’d delivered one of the show’s weather reports, Dan was keen to ask about Carol’s surroundings at the Tower of London.

“Carol, I know it’s very early in the morning,” Dan began. “But are there any Beefeaters there yet or are they turning up a bit later?”

Carol replied: “We saw one earlier, and do you know why they’re called Beefeaters, Dan?”

“Oh, go on then,” Dan said in anticipation, before joking it was because they all ate beef. 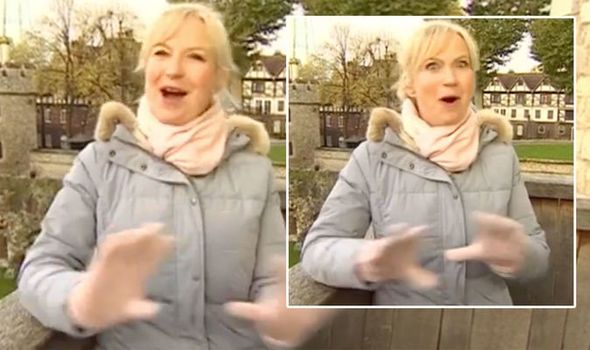 Carol let out a laugh at her colleague’s joke before revealing the real answer.

“Because in the olden days, part of their salaries used to be beef, big chunks of beef.”

Clearly impressed, BBC Breakfast’s Dan said: “You know everything, Carol. I’m gonna test you out on some Tower of London factoids later.”

But Carol looked panicked at the prospect as she began to wave her hands and told Dan: “No! No! Don’t!”