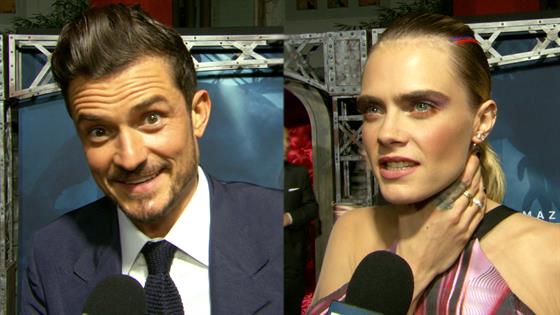 Yes, Carnival Row is absolutely more than that, and even features some social commentary on immigration and racism and discrimination issues that are very much part of our real world, but if you’re not also interested in human cop Orlando Bloom and his forbidden love affair with the pansexual faerie played by Cara Delevingne, then you’re not living your best, most joyful life.

The entire eight-episode season is now available on Amazon Prime Video, but if you’re most curious about the faerie sex and the affair between Rycroft Philostrate (Bloom) and Vignette Stonemoss (Delevingne), that backstory plays out in episode three.

Of course you’ll need to watch from the beginning to get the full story of the Burgue, a city populated by both humans and mythical creatures who have fled their homelands, bursting with tension between the citizens and the immigrant population, and unrest over a series of unsolved murders that Philo is trying to solve, but if you’re primarily interested in finding out what happens to faerie wings during sex, there’s episode three for you.

The show might feel like something that’s based on a book a la Game of Thrones, but it actually was originally a film script created by writer Travis Beacham, who dreamt up the whole thing in his college dorm a decade ago, as Bloom reminded us at the show’s premiere.

“I hadn’t read anything like this,” he told E! News’ Erin Lim about why he wanted to sign on to the project. “Obviously Lord of the Rings had this incredible IP and this amazing book that we could use as a bible, and this was like this brain child of Travis Beacham, his dormitory fantasy brain, which is kind of fantastical, right?”

Bloom says he saw it as an opportunity to feel “liberated” and “excited” in a new fantasy world, with a character he could potentially sustain for two or three seasons.

Delevingne, who plays a character displaced from her home, was excited about the chance to tell stories with a deeper message about immigration on TV.

“The subject matter, the social commentary is incredible, but also the character that I play,” she says. “But I just think talking about immigration and refugees is something that needs to happen in any sense of the word, whether it’s in art or in the world generally.”

So there you go: it’s a show with many layers, telling stories of both immigration and a love affair between a human named Rycroft Philostrate and a faerie named Vignette Stonemoss. It’s got something for everybody, and you can find out exactly how the stars would describe it by hitting play above!

Carnival Row is now streaming on Amazon Prime and has already been renewed for a second season.