‘Cancel culture is appalling’ Jimmy Krankie star fumes ‘everyone has the right to offend! 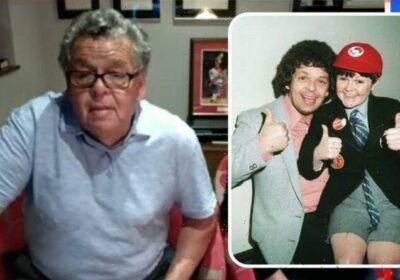 The Krankies discuss if their comedy would be accepted today

Legendary comedy duo, The Krankies have claimed “they’d never get away” with their comedy act today. Joining GB News host Mark Donlan the pair spoke about their career success and inspiration for many of their comical acts. However, when asked about what they thought of modern comedy, Ian said their shows wouldn’t be allowed because they aren’t “politically correct”.

The Scottish comedians said their comedy act, Wee Jimmy Krankie, wouldn’t be accepted by “woke” critics and would have most likely been cancelled.

Janette and Ian enjoyed decades of success on stage and on viewers’ TV screens but told Mark how they hated the cancel-culture modern comics faced.

After looking back at a clip of one of their comedy clips, Mark asked what emotions they felt when watching it back.

Ian said: “Today, I don’t think you can put half the material out, it wasn’t politically correct, but it was huge.

“It got something like 80 million views in the days, we wouldn’t be allowed on your television today.

“We would probably not get away with what we did now. These days you wouldn’t get half the material out.

“It wouldn’t be allowed on your telly today. We’d have to do different material. Janette dressing up as a wee boy?

“You should be able to say what you want. If you offend someone, then everyone has the right to be offended and to offend.

“We never did anything like that. But we did, looking back, work on material that wouldn’t be accepted today because of this woke business.

“It’s sad to see how things have gone. We shouldn’t have this cancel comedy.”

In recent years the pair have continued to launch new characters with Janette dressing up as Susan Boyle and Miley Cyrus.

Touching on how the Britain’s Got Talent star reacted to their comedy sketch, Janette revealed: “Susan loved it, she came to watch the show.

“But I don’t think I will be dressing up as Jimmy anymore. I’m 75 and probably a bit too old to be throwing myself around on stage these days.

“But it was a wonderful time, and we made some great memories and hopefully made a lot of people laugh.”

@GalanthusA said: “I loved this interview, I completely agree with everything you said. Really hope they make it to the studio soon.”

@robertsondcang1 commented: “Great interview with them. Nice to hear their perspective on toxic Nationalism, telling it as it is.”

However, some disagreed with Annie Crest, adding: “There’s a reason that your jokes wouldn’t be allowed now, they’re offensive, and you need to accept that!”

While @MarkyMark responded: “Ian saying that people have a right to offend? Not sure how that works, there’s a reason cancel culture exists.” (sic)