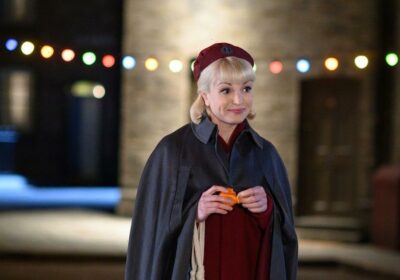 It’s become a Christmas tradition to sit down on the sofa and tune into BBC One’s Call the Midwife every Christmas Day – and this year will be no exception.

To get fans of the hit BBC One drama in the festive spirit, the show’s star Helen George, who plays midwife Trixie Franklin, has teased details of what viewers can expect from the nuns and midwives of Nonnatus House.

And it sounds like it’s going to be one to remember as Helen, who has starred on the show since the very beginning, explained viewers can expect to both cry and smile as in previous years. The 37-year-old actress, who recently welcomed her second child, explained: “I think people always expect the light and shade in Call the Midwife, especially in the Christmas special.”

Helen continued to the Radio Times: “I think there’s an anticipation that you’re going to be crying over your sherry but then rejoicing by the end of it.”

The star also touched on a particularly memorable storyline that the cast are tackling, admitting that it may be “pretty traumatic” for viewers.

She continued: “It’s a current thread we’ve had going but yeah, pretty traumatic as well, I guess. But that’s the nature of childbirth, or Call the Midwife.”

The Christmas special will pick up in December 1966, as Nonnatus House are putting the final preparations in place for Lucille (Leonie Elliott) and Cyril’s (Zephryn Taitte) big winter wedding.

Meanwhile, the team are going to be busier than ever, as the Maternity Home is packed full of expectant mums-to-be. But, as fans have come to expect, it won’t all be plain sailing as many of the expectant parents will have challenging births, and will need to lean on the midwives to help them through.

And luckily for the team Mother Mildred (Miriam Margolyes) is back to lend her unique form of support as they deliver more adorable newborns.

Helen’s co-star Jenny Agutter, who plays Sister Julienne, has also hinted at what viewers will watch over the festive period. During an appearance on BBC One’s The One Show, Jenny explained: “We find ourselves overwhelmed by the amount of births coming up and not enough people to take care of it.”

She went on to say that it could cause an issue for the team, adding: “We’re running out of midwives.”