BTS Will Have a Guest Appearance on the 'Friends' Reunion Special 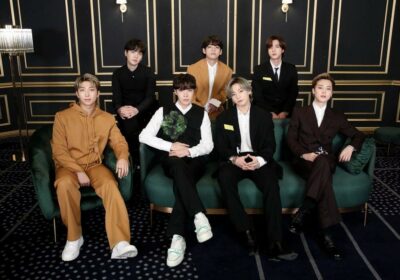 BTS will appear in the ‘Friends’ reunion

On May 13, Variety published a report that the reunion special for Friends will premiere on May 27. The reunion was originally supposed to take place in 2020, but it was delayed due to the ongoing coronavirus (COVID-19) pandemic.

HBO Max also released a trailer for the reunion special. In the trailer, Aniston, Cox, Kudrow, LeBlanc, Perry, and Schwimmer walk through a studio lot with their arms around each other.

Text then appears onscreen and reads, “The One Where They Get Back Together.”

The members of BTS are fans of ‘Friends’

In multiple interviews, Jin, Suga, J-Hope, RM, Jimin, V, and Jungkook have brought up that they are fans of the TV show Friends. On an episode of The Late Late Show with James Corden, BTS took part in the popular Carpool Karaoke segment.

During Carpool Karaoke, Corden asked RM about how he learned to speak English.

“Actually, I taught myself by Friends,” RM said.

As RM explained his experience watching Friends, Jin and Suga quietly commented that they watched the show too.

“I enjoyed watching it,” Suga said with a smile.

“He memorized it to study,” Suga commented about RM.

The members of BTS and Corden then sang the song from the opening credits of Friends, “I’ll Be There for You” by The Rembrandts.

What is the ‘Friends’ reunion?

Friends aired on NBC from 1994 to 2004, and it is one of the most beloved sitcoms of all time. For years, rumors of a reboot have swirled even though creators David Crane and Marta Kauffman repeatedly claimed that a reboot will not happen.

Despite fans’ wishes, the Friends reunion is not a reboot of the TV series. According to Variety, the six main cast members will reunite on “the iconic comedy’s original soundstage, Stage 24, on the Warner Bros. Studio lot in Burbank for an celebration of the beloved show.”

The details of BTS’ guest appearance are unclear, but ARMY will be able to watch the band members on the Friends reunion special when it debuts on HBO Max on May 27.