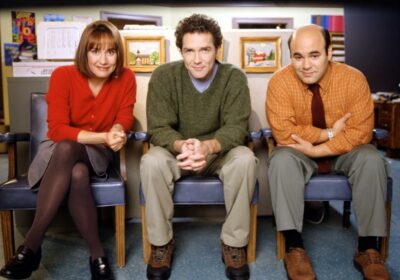 The Conners executive producer/showrunner Bruce Helford, who had been friends with Norm Macdonald for two decades, shared memories about the comedian and former SNL Weekend Update anchor who died today at the age of 61 after a long, private battle with cancer.

Helford first worked with Macdonald on Roseanne in 1992. Helford was an executive producer on the hit ABC comedy series, on which Macdonald was a writer for about a year before he left to join Saturday Night Live. During Macdonald’s 1993-98 tenure on the NBC sketch show, he guest starred on Helford’s ABC comedy series The Drew Carey Show and, following his exit from SNL, he teamed with Helford to co-create and executive produce The Norm Show (aka Norm), a multi-camera comedy series headlined by the comedian and also starring Roseanne’s Laurie Metcalf, which ran on ABC for three seasons.

“We did his Norm show together, which is one of the best shows I’ve ever done,” Helford said. “And it was because he was so brilliant and irreverent and he pretended he didn’t care, but he cared very much and worked really hard to create something unique. He was so admired by other comics because he had that rare gift – a voice that no one else had. A rhythm and a brain that were unlike anyone else.”

Macdonald and Helford’s relationship continued after Norm ended its run in 2001, and Macdonald served as a consulting producer on the Roseanne 2018 revival, which Helford also executive produced.

“We’ve been close all these years and I will miss him very much,” Helford said. “I remember a joke he made about cancer: ‘You always read about people battling cancer. It’s not a battle. There’s this big black thing and then it kills you.’ But he fought hard and we got to enjoy him that much longer. He also didn’t know how to drive.”