Brooke Baldwin Shares a Powerful Moment with Her CNN Security Guard: You 'Touched My Heart' 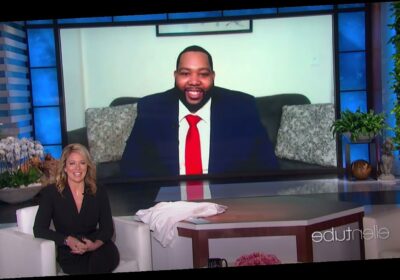 Brooke Baldwin is preparing to say goodbye to CNN — and there's one person she's going to miss in particular.

Baldwin stepped in as guest host of The Ellen DeGeneres Show on Friday, where she took a moment to spotlight her friend and CNN security guard, Anthony Anderson.

"Every time I finish my shift during the day, you always text me, 'What time are you leaving?'' she told him via video chat. "You meet me in the hallway, you walk me out of the building, get me to my car just to make sure I get there safely."

Over the years, the anchor, 41, and Anderson formed a close friendship. On Ellen, the security guard said their bond started on day one. The feeling was certainly mutual. Baldwin said Anderson's positive attitude had a lasting impact on her.

"Every day when I see you and I ask you how you're doing, you always say, 'Fantastic and only improving,'" she said as Anderson recited the phrase with her.

Anderson explained that he adopted the motto after overcoming a particularly "dark" time in his life.

"It's at that lowest point that you figure out how to get to the light," he said, adding that he chose to "invest" in himself and remind himself daily that things can always get better. "I hold myself accountable."

Becoming emotional, Baldwin said Anderson "touched [her] heart" when he gifted her a sweatshirt with the motto, the day before she officially announced her exit from CNN.

"It was that act of kindness, that gesture, that so touched me," she said. "I'm just so grateful to you for that."

"You're so full of life," Anderson replied. "You made me feel like I belong. That meant the world to me. I knew I could never repay you, but what I can do is give on to you my mantra, what I live by, as a thank you."

To pay it forward, Baldwin informed Anderson that he'd be receiving $10,000 from Shutterfly, Ellen's philanthropic partner.

"Oh my goodness, this is amazing!" he exclaimed. "Best day ever."

The CNN Newsroom with Brooke Baldwin host announced her exit from the network last month. She will remain in her anchor chair at CNN until mid-April.