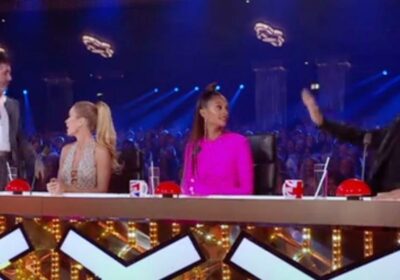 It's the final countdown for the Platinum Jubilee, and the final live show of Britain's Got Talent for 2022.

And while the Red Arrows might have had to cancel their Pageant appearance, there's no cancelling the BGT grand final.

In Friday's final semi-final show, hosts Ant and Dec left viewers disappointed after revealing that there would be no show on Saturday evening as usual.

Ant broke the news to viewers as he said: "That's it from us but see you on Sunday night at 7.30pm straight after the football for the final of Britain’s Got Talent 2022."

Dec added: "Plus, we've got a live performance from the cast of Sister Act: The Musical. They're going to be here on Sunday." Since then, the official social media page for Britain's Got Talent recently took to Twitter to reveal the news of a brand new wildcard finalist for tonight's live final.

They wrote: "The Judges have decided, and our #BGT 2022 WILDCARD is… Amber and The Dancing Collies."

Amber and The Dancing Collies, who originally missed out to impressionist Ben Nickless and music duo Flintz & T4lyor, will now be joining the rest of this year's finalists.

Fans were left in 'happy tears' after Amber, 25, performed a pirate-themed dance routine alongside her two Border Collies, Nymeria and Ruby and the act will now have a second chance after they were chosen by the judges as the seasons' wildcard.

But who else is taking part in the finale? Let's take a look at the official line-up…

Loren is already famous for her incredible vocals on the soundtrack of The Greatest Showman, which caused quite a stir after the BGT auditions.

Amanda Holden used her golden buzzer to rocket Loren straight through to the live shows after the singer gave a beautiful rendition of her song Never Enough, which she also sang in the musical film.

ITV bosses defended Amanda’s decision to propel Loren into the semi-final after she received critique from fans online.

A spokesperson told the Metro: "Whilst most people will have heard the infamous Greatest Showman track, Loren is not a household name, and she deserves her spot on the BGT stage.

"We hope that such articles will not count against somebody who is well-deserving of this opportunity.

"It’s fantastic that Loren is now able to step out and stand in her own right to be the face, and not just the voice, of one of the most well-known tracks of all time."

The winner of Britain's Got Talent will be crowned tonight (Sunday, 5 June) after the live final kicks off at 7.30pm.

For updates on all your favourite celebs & TV shows, sign up to our daily newsletter here.