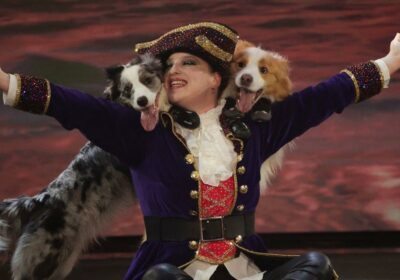 Amber Karstens is set to compete in the Britain’s Got Talent final on Sunday night (June 5).

The performer and her pups Nymeria and Ruby have been given a place in the line-up as this year’s wildcard act.

They were picked by judges Simon Cowell, Amanda Holden, David Walliams and Alesha Dixon with just hours to go until the final.

It means Amber, from the Netherlands, is now in the running to win this year’s series and nab the £250,000 prize money.

Dog trainers have taken the title twice in the past — Ashleigh and Pudsey in 2012 and Jules O’Dwyer & Matisse in 2015. The act, known as Amber and The Dancing Collies, has had big support from viewers.

In a post online, one fan said: “Amber and The Dancing Collies definitely need to win. They brought happy tears to my eyes.”

Maxwell, from Yorkshire, is the bookies’ favourite to win.

The show will also feature a performance by the cast of musical Sister Act including Beverley Knight, Jennifer Saunders and Lesley Joseph.

Viewers were left frustrated by the results during Friday's episode as Axel Blake and Aneeshwar Kunchala made it through to the final. They declared the show was a fix after realising that yet another Golden Buzzer act had made it through following Loren Allred's progression the night before.

Another added: "Wouldn’t it be simply simply lovely if We all vote Brian and Krysstal so that for once all of us at home rig the result instead [of Simon]!"

Britain's Got Talent final kicks off Sunday, June 5 at 7.30pm on ITV