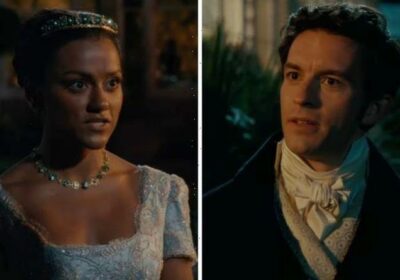 The first follow-up to Netflix’s overnight smash hit is almost upon us, and the first footage has just been released during the streamer’s recent ‘TUDUM’ fan event. Has Bridgerton’s next steamy central romance finally been revealed?

Anthony Bridgerton (played by Jonathan Bailey) faces off with newcomer Kate Sharma (Simone Ashley) in an intense clip from the upcoming second season.

Bridgerton stunned subscribers last Christmas, and has already been confirmed to return for at least three more seasons.

Based on Julia Quinn’s series of novels, the sultry period drama will take inspiration from book two, The Viscount Who Loved Me, in the second instalment.

This entry will focus on Anthony, the older brother of the last season’s protagonist Daphne Bridgerton (Phoebe Dynevor), and his quest to find himself a wife.

Brand new footage from the upcoming follow-up was finally unveiled during Netflix’s first ever TUDUM conference, in which a number of juicy details were revealed.

Having caught her eavesdropping outside, Kate proceeds to berate the viscount for loudly declaring the lofty requirements needed for his new bride.

An official description describes Kate as a headstrong London newcomer who ‘suffers no fools — Anthony very much included.’

Kate certainly asserts herself in the latest clip, and Anthony is left feeling rather taken aback by her withering put-downs and acerbic wit by the end of their brief conversation.

However, fans of Bridgerton’s first season will already be familiar with the series’ fondness for a classic ‘enemies-to-lovers’ storyline.

Once the new scene was released on YouTube, the comments were shortly packed with viewers predicting their impending romance.

User Zoey said: “OH HELLL YES, a woman who is going to keep Anthony in check.”

“And he’ll end up working on himself. There’s gonna be drama and chemistry; this’ll be great!”

Ramakearayan predicted: “The smile he gave her when he recognised a woman who he secretly wished he’d want to meet again meant he already fell in love with her but he just hadn’t realised it yet…”

And finally, Jasmine commented: “I’ve literally come back to this so many times, the chemistry and banter is already everything.”

While Bailey and Ashley’s chemistry is palpable, readers will have already spotted a potential complication in the new clip.

In Quinn’s books, Anthony is actually destined to marry Kate’s younger sister Edwina, who will be portrayed by Charithra Chandran in the Netflix adaptation.

Details are being kept under wraps for the moment, but Anthony could find himself caught in a love triangle with two sisters as the series goes on.

Then again, this storyline may have quite easily been dropped for the upcoming season, as evidenced by Anthony and Kate’s heated exchange in the exciting first teaser.

Bridgerton season 2 will be released in 2022 on Netflix.