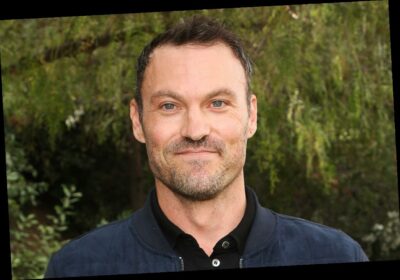 Brian Austin Green and Sharna Burgess took their relationship online this week when the Dancing with the Stars professional shared a photo of the pair kissing on Instagram Monday.

The snapshot shows Green, 47, and Burgess standing on a balcony overlooking palm trees and an ocean shore. The Beverly Hills, 90210 star holds Burgess' face as they share a kiss.

Over the weekend, Green told Access Daily that things with Burgess were "going really well right now," but added that the duo weren't in a rush to label things.

"It's all going really well right now. It's early on so we don't have any labels for anything, obviously," he said.

RELATED: Brian Austin Green Says He and Sharna Burgess Don't 'Have Any Labels' But Things Are 'Going Really Well'

Green and Burgess recently went to Hawaii together, where the actor said they "had a really good time."

When asked by fans on Instagram over the weekend about her relationship status with Green, Burgess told her followers to "let it go."

Last month, a source told PEOPLE that Green — who filed a petition for divorce from estranged wife Megan Fox in November — had "been seeing Sharna for a few weeks." RELATED: Sharna Burgess Says 'Let It Go' When Asked About Her Relationship Status After PDA with Brian Austin Green

"They are casually dating and having a good time. They are currently vacationing together," the source said at the time. "Brian was happy to leave L.A. for a few days."

Green confirmed his split from Fox, 34, in May of last year, and cited irreconcilable differences as the cause of their divorce. They share sons Noah Shannon, 8, Bodhi Ransom, 6, and Journey River, 4.

Fox is currently dating Machine Gun Kelly and became Instagram official with him in July 2019.