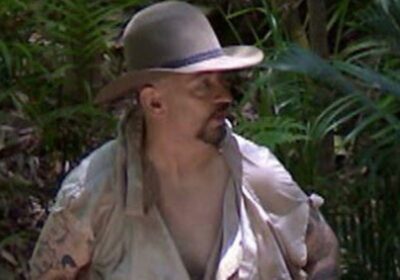 I'm a Celebrity… Get Me Out of Here! 2022 star Boy George has confessed why he wasn't keen on stripping off in the jungle.

The 80s pop icon, who is best known for singing the hit song Karma Chameleon with his band Culture Club, wasn't often seen getting his kit off in the camp.

When taking a dip in the pool with Strictly Come Dancing star and comedian Seann Walsh in November 16's episode, Boy George could be seen wrapped in a makeshift cover up.

READ NEXT: Ant and Dec defend Boy George after I'm A Celebrity fans brand him 'two-faced' after rant

Fans even took to Twitter at the time, with one writing: "Boy George very stylish! his own cover-up and hat, at the pool, coordinating look."

With someone else adding: "He creates fashion from anything and everything! Lol! So adorable!"

But now it seems as though George has always "un-naturist" and isn't comfortable when he isn't dressed up – hence his makeshift cover up for his dip in the pool.

His confession isn't a recent one – in fact it's from his 2005 autobiography entitled Straight.

Speaking about his love of photography, in Boy George's Straight book, he had an entire chapter dedicated to "rude snaps".

"I managed to secure Johnny through my drag queen pornographer friend Chi-Chi La Rue," he wrote.

Admitting: "The day I worked with him I was the one shaking.

"I started him off in full Rude attire and slowly he stripped off completely.

"His absolute ease about being naked was completely at odds with myself, being an un-naturist. I dress up, not down."

I'm A Celebrity… Get Me Out Of Here! continues nightly on ITV1 and ITVHub.

For the latest breaking news and stories from across the globe from the Daily Star, sign up for our newsletter by clickinghere .