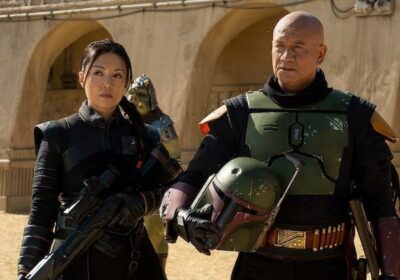 To hear series lead Temuera Morrison tell it, The Book of Boba Fett has but scratched the surface of otherworldly threats with Episode 2’s introduction of Hutt twins and Krrsantan the gladiator Wookie.

Speaking with TVLine in the video Q&A above, the New Zealander and co-star Ming-Na Wen first share some secrets about what goes into the making of a half-ton of Hutts — including who read the male Twin’s lines for the actors there on set, and what exactly they were looking up at the whole time.

Wen and Morrison then share their own excitement over the Disney+ series’ simultaneous introduction of Krrsantan (whose name Morrison takes joy in pronouncing), a bounty hunter Wookie known from the Star Wars comic books.

Beyond the Hutts and “Santy,” Morrison very carefully teases more “colorful chaps” who will cause trouble for rising crime boss Boba and his sharpshooter muscle, Fennec.

Wen then weighs in on whether Fennec will make like Agents of S.H.I.E.L.D.‘s Melinda May aka “The Cavalry” and get an ass-kicking showcase.

Wrapping things up, I took a flyer and asked if The Book of Boba Fett might have its own “Luke Skywalker moment” — meaning, a reveal that makes us the audience remark, “I can’t believe that character turned up on this show!” But you’ll have to press play above to see if they took my bait….

[Note to self: Buy a Fennec Shand action figure ASAP!]

Want scoop on Boba Fett, or for any other show? Email [email protected] and your question may be answered via Matt’s Inside Line.