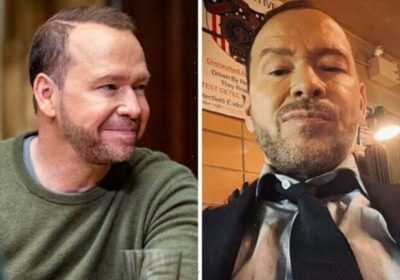 Donnie Wahlberg is currently best known as Danny Reagan, the devoted son of New York Police Commissioner Frank (played by Tom Selleck). The Reagan family have been at the heart of CBS’s popular primetime drama Blue Bloods for well over a decade, and series regular Donnie’s latest Instagram post suggests the series could continue even longer.

Danny star Donnie took to Instagram on Friday to confirm a wrap on Blue Bloods season 12.

His new update also confirms the cast is ready to get started on the 13th instalment, pending a renewal from CBS.

“That’s a wrap on #BlueBloods season 12!” he wrote. “Makes this #BlueBloods #Friday a little more special.”

The current season of Blue Bloods is continuing this Friday after taking a short midseason break in March.

It will then go on another brief hiatus and return for a new episode on April 29.

Donnie continued: “Thanks to all who have supported, and continue to support, me and my TV Family.

“Enjoy the show tonight, and the next few weeks!” he added before making a nod to season 13.

The TV star then teased fans: “Then hopefully, we’re on to season 13 (god willing)!”

Blue Bloods’ cast and followers are still awaiting official confirmation from CBS that the show will continue into next year.

While the series has yet to be cancelled or renewed, it’s still a top performer for the network.

This season of Blue Bloods has regularly pulled in five to six million viewers per episode, so hopefully, it’s only a matter of time until it gets the all-clear for season 13.

In the show’s latest run, Frank has butted heads with Mayor Peter Chase (Dylan Walsh) and his efforts to shake up the New York Police Department.

Meanwhile, Danny and his partner Maria Baez (Marisa Ramirez) have continued to tackle the city’s toughest cases, including a gang assault on a corrupt detective.

They recently investigated the murder of a wealthy college student whilst Eddie Janko-Reagan (Vanessa Ray) while her own partner Luis Badillo (Ian Quinlan) continued to step out of line.

Season 12 is heading rapidly towards the finale next month, with just three episodes of its 20-episode season still to air.

The reported plan is for the Blue Bloods finale to air on Friday, May 6 alongside Magnum PI, the remake of Tom’s classic 1980s detective show.

It will then head on its usual summer hiatus before it most likely returns in September or October of this year.

Previous seasons have kicked off in September before the series and many like it were hit with Covid delays in 2020.

While there hasn’t been a confirmation just yet, Donnie’s hopes for season 13 should be answered in the next few weeks.

Blue Bloods season 12 continues Fridays on CBS in the USA. Season 11 continues Mondays on Sky Witness in the UK.