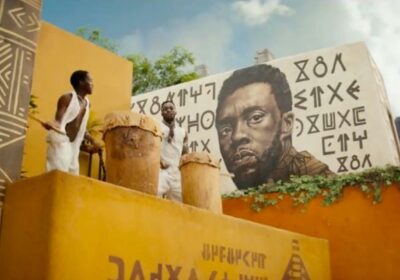 The clip, which was released on Saturday, July 23, opens with a cover of Bob Marley’s ‘No Woman, No Cry’ and concludes with the tune of Kendrick Lamar’s ‘Alright’.

AceShowbiz -The long wait for “Black Panther: Wakanda Forever” will soon come to an end. During its panel at this year’s San Diego Comic-Con, Marvel unleashed the first trailer of the upcoming movie.

The clip, which was dropped on Saturday, July 23, opens with a cover of Bob Marley‘s “No Woman, No Cry”. It offers glimpses of Nakia (Lupita Nyong’o), Ramonda (Angela Bassett), Okoye (Danai Gurira) and Shuri (Letitia Wright).

A mural of Chadwick Boseman‘s character T’Challa then flashes up during Ramonda’s emotional speech. “I am queen of the most powerful nation in the world and now my entire family is gone. Have I not given everything?” she declares.

As the footage transitions, it shows Riri working on a version of her Ironheart armor before it cuts to a scene where M’Baku (Winston Duke) attacks Namor on the shore. The trailer concludes with the tune of Kendrick Lamar‘s “Alright”.

“Black Panther: Wakanda Forever” is directed by Ryan Coogler, who also helmed the first “Black Panther” film. Speaking about the sequel in the wake of Boseman’s death, the filmmaker said, “It’s going to be hard to follow that up, but we’ll try.”

“It’s been five years since I was here. I sat about there and we premiered the first footage from ‘Black Panther 1’, and sitting next to me was our T’Challa, the late great Chadwick Boseman,” the 36-year-old added. “I promise you, I can feel his hand on me right now.”

Also attending the event were Nyong’o, Wright, Gurira, Florence Kasumba as well as Duke, who said, “It’s a labor of love, and I have so much gratitude to be a part of it and be able to share it with you.” Wright, meanwhile, gushed, “It’s a blessing. We’ve all grown so much as a family, and it feels great to see you guys and honor big bro at the same time.”

“Black Panther: Wakanda Forever” is due out in the U.S. on November 11.