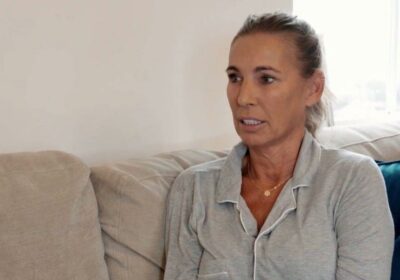 Billie and Sam Faiers' mum Suzie is seen battling a terrifying bout of sepsis as she’s rushed to hospital in the latest episode of Billie & Greg: The Family Diaries.

Billie Shepherd’s mum Suzie Wells was hospitalised last month after a water infection she was struggling with turned into sepsis.

In a clip from Wednesday 26 October’s episode, Suzie can be seen lying in hospital as she fights off the infection, which Billie calls a “wake-up call” for the whole family.

Thankfully, Suzie made a full recovery and sat down with her daughter after coming home from hospital to discuss the ordeal she had just been through.

Billie, 32, who is currently expecting her third child with her husband Greg Shepherd, had been due to take her children on the school run in the morning, when she found out hours before that her mum had been rushed to A&E after taking a turn for the worse.

“I was more worried about you,” said Billie’s mum Suzie. “It was your first day taking the kids back to school, you didn’t leave until, what, three in the morning?”

In reply, Billie said: “Yeah, but I didn’t care about that, I was just worried about you! How do you feel now, do you still feel quite weak? When the doctor said to me about sepsis, I was thinking, it can be fatal, can’t it?”

But luckily, the outcome for her mum was good, as she explained: “They scanned all my organs, they scanned everything and said none of my organs were affected, so it must have just started to set in.”

“I think it’s just a bit of a wake-up call, for any of us actually,” Billie said. “When you feel that bad, you’ve just got to go [to the hospital], haven’t you?”

“If I feel that bad again, I’m not going to leave it that long!” confirmed Suzie.

Speaking exclusively to OK! about the terrifying ordeal, Suzie told us: “It was awful. I was delirious, vomiting and one minute I was hot and the next I was cold and shivering. I couldn’t eat or sleep either.”

Admitting she should have sought treatment sooner, she continues: “I was so poorly but I kept putting it off.

"I’ve not been in hospital since I had my children and I’m frightened of going into hospital. It was Billie and my sister who got me to go in.

“I ended up on a drip. They pumped me with penicillin and I was able to go home the next day – but I should have gone sooner and it might not have got as bad.”

Suzie says her famous daughters were “really worried”, but she’s thankfully on the mend and looking forward to the future.

“It’s so exciting with my sixth grandkid on the way,” she smiles. “It’s going to be busy but I can’t wait.”

Billie and Greg: The Family Diaries airs tonight at 9pm on ITV Be