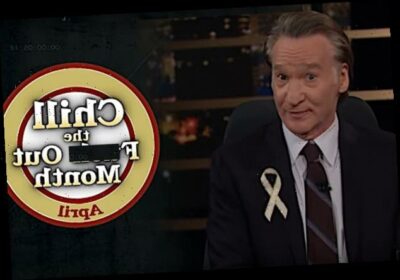 “In April, please won’t you join me for a Chill the F— Out Month?” the “Real Time” host asks

Bill Maher once again dove into the deep end of controversy, this time saying he’s had his fill of awareness campaigns that remind people of everything from breast cancer to Alzheimer’s and Black Lives Matter.

“It’s time to raise awareness about a very serious problem — raising awareness. We raise too much of it, and it’s making us crazy anxious and depressed,” Maher said in Friday’s “New Rules” segment on HBO’s “Real Time.”

“Must we be sad about everything all the time, most of which we can’t do anything about? The ads, the hashtags — it’s like that person on the plane in the next seat that won’t take a hint that you don’t want to talk.”

Maher made light of the situation, slapping on a ribbon “to raise awareness for the growing epidemic of raising awareness.”

Glaucoma, Lupus, Down Syndrome, epilepsy and brain injury awareness weeks were among those he mentioned. “Oh, and lest, I forget, this Monday kicks off World Salt Awareness Week, a whole week to be aware of salt,” he added. “Is there someone out there thinking, ‘Why do restaurants always put the cocaine right next to the pepper?’”

He went on to rant about the abundance of pink products available. “Everything you can buy now comes in a pink version to raise awareness of breast cancer, including a pink drill bit for fracking, which is probably giving us cancer,” he said. “Staples sells pink breast cancer awareness pens, paper clips, scissors, even a pink stapler shaped like a ribbon. Walking the aisles there is like a visit to the cancer museum.”

Turning his ire to the Black Lives Matter awareness issue, he said, “Crew members on the major airlines now wear Black Lives Matter pins during the flight. You know, you can support a movement without being constantly reminded of it. Can I just get a rum and coke and hold the white guilt trip till we land?”

“The part about this stuff that bugs me, it’s not actually doing something. That ribbon isn’t there to make me think so much as to raise awareness of what a good person you are,” he said. “So, in April, please won’t you join me for a Chill the F— Out Month?”

You can watch the entire segment at the top.