Home » TV & Movies » Big Brother Recap: Is 'The Cookout' Down a Member After Eviction No. 6?

Big Brother Recap: Is 'The Cookout' Down a Member After Eviction No. 6? 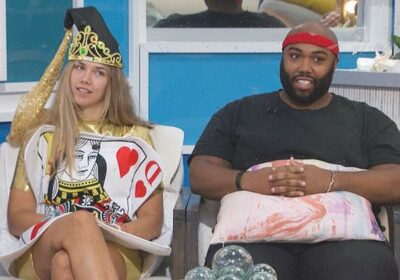 For the second week in a row, Big Brother has left us guessing about whether the Power of Veto was used to change the nominations — or, in this case, whether two Power of Vetos (er, Powers of Veto?) were used.

If you watch the live feeds or keep up with spoilers on social media, the start of Thursday’s episode came as no surprise to you: Alyssa chose not to use the veto she’d won in the OTEV competition, while Kyland did use his bonus veto to take Claire off the block and replace her with Britini. Poor Britini, y’all. And her overworked tear ducts.

Derek F. was originally nominated as a pawn, and with The Cookout making up half of this week’s votes, his safety against Britini seemed likely. Read on, though, to learn how Eviction Night unfolded:

THE STRATEGY | With Britini now up for eviction yet again, Derek X. and Claire — two of the non-Cookout members who are casting a vote this week — feel certain that Britini should stay. Because Derek F. hasn’t proven to be much of a competitive or strategic threat thus far, they theorize that Derek F. will always be able to avoid eviction, since other houseguests will want to take him to the Final Two and easily beat him in the end; if Derek F. doesn’t go now, they say, he never will, whereas Britini will remain loyal to whomever keeps her in the house and could protect Derek X. and Claire moving forward.

Their logic is sound, but Hannah and Tiffany are tighter with The Cookout than they are with either Claire or Derek X., and they don’t love hearing that members of The Cookout are on non-Cookout members’ radar. To that end, Tiffany and Xavier agree that Derek X. is one of their primary targets now, and Xavier tries to make Derek X. feel so safe for the week ahead that Derek X. would agree to throw the Head of Household competition to Xavier.

Derek X. appears to strongly consider giving Xavier the HOH win when the time comes — but fortunately, he relays his conversation with Xavier to Claire, and she points out that Xavier is likely planning to backdoor Derek X. if he gets the opportunity. (Whew! Don’t be naive, Baby D!)

THE EVICTION | Even though Derek F. is a tempting evictee this week, it’s just not in the cards for Britini to even force a tie, which would have prompted Kyland to cast the deciding (and likely Cookout-revealing) vote. Instead, Britini is ousted by a vote of 7-1, with only Azah voting for Britini to stay. Britini takes it all in stride, though, and tells Julie that she’d like to see her fellow houseguests make some big moves instead of playing it so safe.

THE HEAD OF HOUSEHOLD COMPETITION | The next HOH competition is completed live, and it’s s-t-r-e-s-s-f-u-l to watch: Houseguests must cross a series of intersecting balance beams, which vary in width, and hit the buzzer on the other side of the maze in the fastest time; they’ll automatically be eliminated if the course takes them longer than 45 seconds to complete.

Claire is up first and manages to hold the lead for a while, then she’s usurped by Sarah Beth. And though Derek X. comes thisclose to beating her (full disclosure: I unabashedly adore Baby D and am rooting for him hard), it’s Sarah Beth who maintains the win in the end. Of all the strategies that puzzle me during this competition, it’s Tiffany’s that confuses me the most: With Sarah Beth —  one of Tiffany’s biggest targets — poised to win, why would Tiffany risk walking across the super-skinny balance beam instead of simply booking it across the reasonably wide one? Gah!

But now it’s time for your thoughts. How do you feel about Britini’s eviction? And who do you think Sarah Beth will nominate? Drop a comment below!