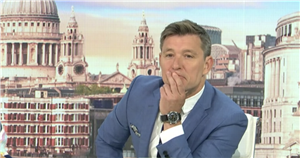 Ben Shephard returned to Good Morning Britain on Monday after taking some time out to recover from a painful injury.

Susanna Reid, 50, wanted to offer up some comfort to her co-star but was glad to have Ben at her side again.

The Tipping Point host replied: "Thank you very much."

"That looks slightly uncomfortable can I just get the mini cam. Is this our new mini cam? So what's up with your leg?" asked Susanna.

The Tipping Point host explained: "I just thought, I've been off for a few weeks, I'm going to start bringing in some changes.

"I'm going to start doing the show with my feet up."

At that point Ben raised his legs and popped his legs up so that he could get some comfort.

Susanna managed to activate the mini-cam and began to film from a birds-eye view.

Ben added: "So if your not aware – and I've done my best to tell as many people as possible – this knee here, my right knee. I ruptured the ACL and I did various other things."

He went on: "Trying to pretend that i'm still a 25-year-old. I've had an operation to repair it all."

The dad-of-two went on to explain that Dr Hilary had helped him to understand the severity of his injury.

"Do you know what, it was only when I explained it to Dr Hilary and we were on air and he said 'oh yeah well what the ACL does is connects the bottom leg from the top, otherwise it just flaps about a bit," said Ben.

Later on in the programme, Susanna told viewers that poor Ben's leg was still "very sore".

GMB returns tomorrow at 6am on ITV.