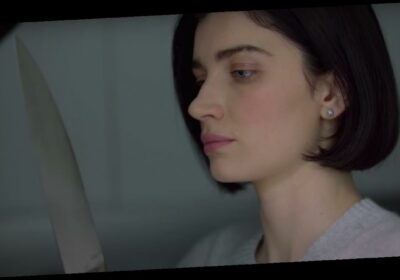 At this point, movies that position themselves as the next Gone Girl (see: The Girl on the Train, the upcoming Woman in the Window) are becoming a little old-hat. So why not a Netflix miniseries that does that instead! Behind Her Eyes is more trippy psycho-sexual thriller than Hitchcockian suspense movie, however, with an ending so shocking that Netflix is marketing the film almost exclusively around it. What is the ending? Well, you’ll have to watch to find out.

Behind Her Eyes Trailer

In Behind Her Eyes, a single mother (Simona Brown) finds herself entangled in a weird love triangle between her psychiatrist boss (Tom Bateman) and his seemingly perfect wife (Eve Hewson). She embarks on a steamy affair with Bateman’s character just as she begins a close friendship with Hewson’s, leading to all kinds of messy drama. And everything may or may not have something to do with dreams.

The trailer is very atmospheric and eerie, with lots of dreamlike imagery and Hewson wielding sharp knives. But it’s hard to tell what “THAT” ending is, which is being hyped up so much by Netflix and whether it’s worth all the commotion.

Here’s the official synopsis for Behind Her Eyes:

Louise Barnsley is a young, single mum whose otherwise uneventful life is plagued by night terrors. But things take a turn when she becomes romantically involved with her handsome and mysterious boss, psychiatrist David Ferguson. To make matters more complicated, David also happens to be married to the beautiful, seemingly-perfect Adele.When Louise bumps into Adele by chance, they form a secret friendship and bond over Adele’s own history of nightmares. Adele learned to control hers years ago and wants to teach Louise to do the same with the help of instructions in an old journal written by Rob, a troubled friend from her past.As Louise reads through Rob’s journal and grows closer to the lonely and isolated Adele, she learns more about Adele’s complicated marriage and turbulent history filled with trauma and loss. She also learns about Adele’s friendship with Rob, who was once Adele’s closest friend during their stay at a psychiatric hospital but is now strangely absent. Adele had taught him the art of lucid dreaming – the ability to control his dreams.From there, the love triangle and web of lies unravels, exposing secrets with the help of the supernatural.