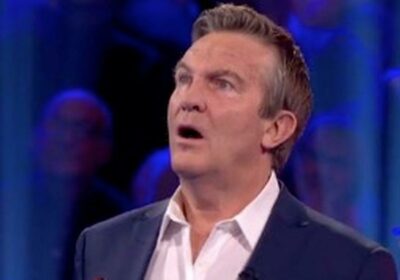 Beat The Chasers host Bradley Walsh was left stunned on Tuesday's episode after a contestant revealed their past link to The Chase.

During the latest instalment, Lynn Barton, who was the first female pilot employed by British Airways in 1987, went up against The Chasers in a bid to win money.

After Bradley shared a collection of aeroplane jokes, Lynn revealed that the head barman at British Airways named a gin cocktail after her.

And that wasn't the only revelation as Lynn also shared that she was once featured as a question on the hit ITV series The Chase.

She said: "Another high point, of course, I did feature in a question on The Chase years ago."

To which Bradley was left stunned as he replied: "No you didn’t!"

While Lynn continued: "It was a cash builder where you asked: 'What Lynn Barton was the first person to do in British Airways in 1987?' And, of course, the answer was become a female pilot."

However, Lynn failed to beat four Chasers and win £25,000 as Bradley said: "I loved seeing you in person, having been a question on then show and to finally have met you, thank you so much."

It comes as The Chase star Anne Hegerty explained her absence on season five of ITV's Beat The Chasers.

"The Governess", 63, will be replaced by Australian The Chase star Issa Schultz on the popular gameshow this week and he will join Jenny Ryan, Mark Labbett, Paul and Shaun Wallace.

Discussing her absence on the show, Anne exclusively told OK! at the Pride of Manchester Awards: "Beat The Chasers is on, 9pm every night and that's the series I wasn't on because I got Covid. So that's the series that's got one of our Australian Chasers on it."

Talking about her replacement, Issa, 38, Anne added: "I think he's going to be brilliant, I think you are all going to love him. He's a smashing bloke!"

For the latest updates on your favourite celebs, sign up to OK!'s daily celebrity newsletter. The Chase continues weekdays at 5pm on ITV.

The MEN Pride of Manchester Awards, in partnership with TSB, will premiere on YouTube at 7pm on Tuesday 17th May.