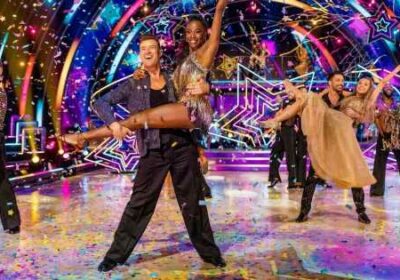 Well, that was FAB-U-LOUS. Viewers lapped up all 2 hours and 20 minutes of Strictly's energetic first live show of the series.

After nine months off our screens, the dancing juggernaut returned to BBC One last night, following last week’s launch show which saw the 15 new celebrities partnered up with their professional dancers.

If you're wondering why there's no show tonight, it's because public voting hasn't started yet. No celebrity will leave until next Sunday, where the judges' scores for Weeks 1 and 2 will be combined with a public vote, leaving two couples in the dreaded dance off.

Next weekend's schedule is as follows:

As for how long Series 19 will run for, that's not been confirmed yet by the BBC. The grand final is traditionally just a few days before Christmas, and usually runs for 13 weeks.

That would give us an estimated grand final date of Christmas Day. which is highly unlikely, so the show will probably bow out on Saturday December 18.

John Whaite and Johannes Radebe’s first dance was a dramatic Tango to Blue Monday by New Order, while Katie McGlynn and Gorka Marquez also did the same dance, with Katie getting in to character to Griff’s Black Hole.

There were four cha chas, with Robert Webb and Dianne Buswell's 'entertaining' dance to Rasputin by Boney M; Sara Davies and Aljaz Skorjanec's Dragon's Den-themed bop to The Boss by Diana Ross); Adam Peaty and Katya Jones' show-ending dance to Beggin’ by Maneskin (which got most of the judging panel hot under the collar) and Tom Fletcher and Amy Dowden's show-opening dance to Earth, Wind and Fire’s September.

AJ Odudu, partnered with Kai Widdrington, and Rose Ayling-Ellis, partnered with Giovanni Pernice, danced the jive to Gold Dust by DJ Fresh and Shake It Off by Taylor Swift respectively. Rose, the show's first deaf contestant, wowed the crowd while AJ gave a dance worthy of Week 9, according to Anton.

Tilly Ramsay danced to Consequences by Camila Cabello with Nikita Kuzmin, while Rhys Stephenson and Nancy Xu danced a beautiful 1940s-styled Viennese Waltz to End Of The Road by Boyz II Men.

Finally, Dan Walker and Nadiya Bychkova did the quickstep to Everybody Needs Somebody to Love by The Blues Brothers. All of the judges remarked that they were 'pleasantly surprised' by Dan, who is 6 feet 6 inches tall.

Strictly Come Dancing continues at 6.45pm on Saturday on BBC One.