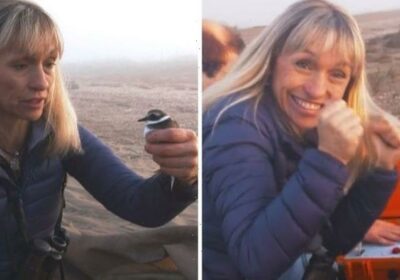 On Thursday night, Chris Packham, Michaela Strachan and Megan McCubbin were back with another episode of Autumnwatch. Chris and Michaela presented the BBC wildlife programme live from Wild Ken Hill in Norfolk. The show also aired pre-recorded clips from throughout the week. However, one segment about bird capturing sparked outrage from BBC viewers.

Michaela joined a group of experts for a survey in which they used a method called cannon netting to capture the birds.

She explained the cannon netting process started before dawn, and it was where nets are placed at strategic points along the beach.

“The idea is as it gets light the nets will be fired over the birds,” the Autumnwatch presenter explained.

“Aiming to catch as many of them as possible in one go.”

Michaela joined the experts on the beach, who had been monitoring different bird species there for over 60 years.

Speaking to leader Nigel, Michaela asked the expert what they were doing there.

“There are a few birds on the beach at the moment,” Nigel began.

“And we’re hoping for a flock of sanderling to come along and join those.”

Once they captured between 40 to 50 birds, the team then set about measuring and “ringing” the sanderlings.

As Michaela held one of the birds in her hand, she said: “You’re the first little bird I have put a ring on.”

After they had collected their data from the birds, they were then released back into the wild.

Taking to social media to share their frustrations at the segment, however, Chris raged: “Shooting a net off like that to capture birds is poor practice #Autumnwatch.”

Jonathan penned: “How is that not hugely detrimental, disruptive and distressing to the birds #Autumnwatch.”

“I hate it. The birds must be terrified,” Lisetta tweeted.

User @BigMaxi59 simply questioned: “Why is this good?”

@Fanxxxxtastic commented: “Blowing up birds with explosives is tight #Autumnwatch.”

Despite the backlash, some viewers enjoyed the segment, and host Chris even said he was envious of Michaela for witnessing such an event.

A spokesperson for the BBC told Express.co.uk: “The BBC has a highly experienced wildlife and nest camera team who have been working together for more than a decade.

“They liaise extremely closely with local wildlife experts, taking their advice on a daily basis. They adhere to all the relevant wildlife protection legislation, consulting with the statutory bodies and with licenses in place whenever necessary.”

Autumnwatch returns on Friday at 8pm on BBC Two.