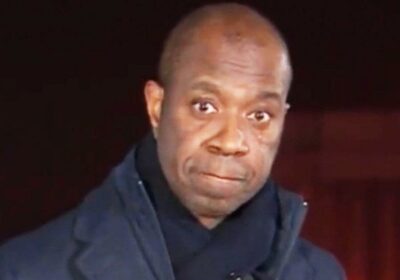 BBC journalist Clive Myrie has been praised by viewers after he was seen shedding a tear while reporting on the horrifying war scenes live from Kyiv.

The 57-year-old reporter became overwhelmed with emotion as he gave an update on the Russian invasion of Ukraine for BBC News at 10 on Thursday evening (February 24).

He was reporting on the attack saying that "fierce fighting is taking place" and that Putin's forces "breached the border in three main directions from the east, the south and the north."

As he prepared to introduce BBC News international correspondent Orla Guerin, a tear could be seen falling down Clive's cheek.

The heart-wrenching scenes didn't go unnoticed by viewers watching the programme at home.

Taking to Twitter, one fan penned: "Seeing Clive Myrie cry on the BBC news will stay with me for some time."

Another added: "Clive Myrie is a heroic broadcaster."

A third person posted: "Thanks @CliveMyrieBBC for being our eyes and ears in Kyiv. Thank you for bringing the humanity of the situation there to us – the people, their concerns, their fears and their tears. We are grateful for your courage, your professionalism, your heart. Thank you. #loveBBC"

While a fourth social media user said: "Clive Myrie is an incredible broadcaster. Informative and empathic."

It comes after viewers of BBC rival ITV were left concerned for Good Morning Britain correspondent Richard Gaisford on Friday (February 25) as bomb sirens interrupted his report from Kyiv.

The chief correspondent had been speaking to hosts Kate Garraway and Ben Shephard when he was forced to put on his equipment.

Richard appeared slightly shaken as the show cut away from his coverage as he took cover.

He looked over his shoulder as Kate asked: "Richard, when we hear those air raid sirens and I know our viewers are worried for you. Are you safe? Should you be running to take shelter? What precautions have you taken?"

"Yeah, we have taken a number of precautions but we have got our – in fact, it's just being passed to me," he replied as he put on a helmet.

"We have got our personal protective equipment to put on. We also have our vests, should the need arise. It is a tricky time for many, obviously, in the city who don't have this kind of equipment to hand.

"As I look out now, there are still people walking through the street, walking the dogs."

Kate added: "We're going to let you get to safety, Richard, and we'll get you back."

Richard later returned to GMB as he continued to report but viewers of the ITV breakfast show were incredibly worried about him.

One fan tweeted: "OMG get Richard home ffs not worth the shot #GMB."

A second added: "@GMB @benshephard Please can you let viewers know that @richardgaisford is safe and will be able to get back to UK."