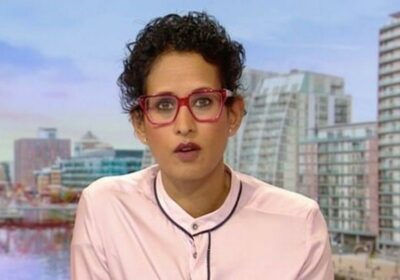 Naga Munchetty has spoken out after her BBC colleague Emily Maitlis announced her departure from the channel earlier this week.

The BBC Breakfast presenter has taken to Twitter to wish her friend and colleague well after Emily announced she will be leaving the BBC after 20 years.

Emily, who was the lead anchor for BBC Two's news and current affairs programme Newsnight after joining the team first in 2006, has traded broadcasting for podcasting, and will be doing so with former BBC colleague Jon Sopel.

Taking to social media to announce the news, Emily said: "Some work news – @BBCJonSopel and I are going to launch a brand new podcast with @Global, exec produced by @dinosofos. It’s an amazing opportunity to do something we all love, and we are so thrilled Global is giving us this opportunity to be big and ambitious with this project."

She added: "@dinosofos has been the powerhouse behind Brexitcast, Newscast and Americast, and we are delighted his new company @persephonica will be producing this major new podcast with Global."

Concluding, she said: "Nevertheless, it will be a wrench to leave the BBC after 20 phenomenal years. I am so grateful for the opportunities I’ve had there. More than anything I’m grateful to have worked with the most incredible people – many of whom are dear friends. I owe my BBC colleagues everything."

Following her career announcement and Naga's congratulations message, fans, friends and former colleagues flocked to the announcement to wish her all the best.

One fan penned: "Enormously sad to hear this. You've always been one of the best. Wish you luck but very sad to see you leave Newsnight et al!"

While another said: "This is not good news. Sorry to see you leaving the BBC."

A third then chimed in and penned: "Sad to see you leave the BBC, Emily. The country’s best interviewer has left the building! Will definitely tune in to your new venture."

This comes as another BBC alum has departed the broadcaster in order to pursue a career in podcasting.

Last autumn Louise Minchin left her role at BBC Breakfast in order to appear on ITV's I'm A Celebrity…Get Me Out Of Here! and was a hit with viewers.

This week, the 53 year old took on a brand new new career move that sees her host a podcast titled Push Your Pea, which has a sporting focus.