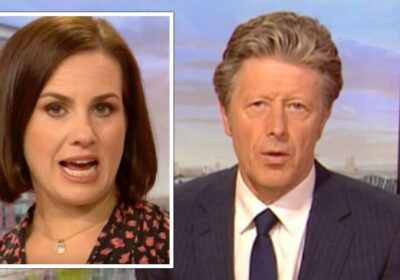 BBC Breakfast’s coverage was centred around Liverpool FC taking on Real Madrid in the Champions League final. The club is aiming to seek their seventh European Cup with hosts Charlie Stayt and Nina Warhurst discussing the match throughout the news programme. Liverpool fans were also interviewed by a correspondent and another reporter who spoke about the upcoming game from Paris which left many viewers disappointed as they were “expecting some news coverage”.

BBC viewers took to Twitter to voice their frustrations over the football-focused instalment of BBC Breakfast, with Sue remarking: “Not much news on is there #bbcbreakfast. Too much talking about football.”

Steve Street commented: “I switched off after 30 minutes of non-stop football… Ridiculous.”

Adrian Gosling added: “Was expecting some coverage in the news this morning about Boris Johnson diluting the ministerial code and taking us another step closer to #dictatorship status. Instead, it’s just about the Champions League.”

@WASPCommander fumed: “Is there nothing happening today except football? #BBCBreakfast.”

However, Ronnie was one of the viewers who approved of the BBC’s football coverage.

He said: “Just watching a report on #Bbcbreakfast about the Champions League final tonight… Getting pretty excited now #LFC.” (sic)

Sports presenter John Watson reported to the BBC Breakfast studio about the upcoming game from France.

Ken Chisholm commented: “It must be nice for BBC sports’ John Watson to be paid to spend his weekend in Paris when you consider BBC isn’t covering the game. #BBCBreakfast.”

Correspondent Matt Graveling was speaking to Liverpool fans from John Lennon Airport who travelled to watch the final.

An excited fan said: “I feel amazing, I got myself a ticket for the biggest game I have gone to by far.

“I managed to get tickets for a final in February and I hope we do the same again today.”

When asked if he thought Liverpool would take home the cup, he replied: “Of course, we can do it.”

Discussing the final, Nina said: “Fans are going by road, by rail, by sea to get there.”

Speaking to Matt via video link, Nina said: “Good morning Matt, a very exciting morning for lots of fans out there, but there must be a bit of tension as well, I am sure you will give us an update on Dennis whose flight was delayed twice.

“Has he made it on his way to Paris?”

Matt revealed superfan Dennis was no longer at the airport, adding: “You know what that means?

Nina and Charlie appeared thrilled Dennis had made it to the match and many other fans were interviewed throughout the programme.

A parade is due to be held in Liverpool when the club arrives home, whether they win or lose the match.