BBC Breakfast viewers concerned for presenter as she struggles through report 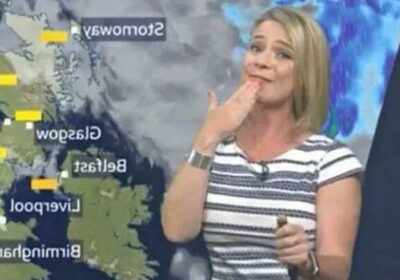 The TV weather forecaster tried desperately to fight off a coughing fit that would have ruined her segment on Sunday's show (July 10).

Poor Sarah looked visibly uncomfortable as she did her best to tell the nation about a possible heatwave without coughing on air.

She ended up apologising to the viewers at home, explaining she was suffering from a cough.

Stifling a cough, Sarah said: "Excuse me," before adding: "Very sorry for my cough!"

Her voice had started shaking during the report which interrupted her momentum, but luckily she managed not to cough.

However, hosts Nina Warhurst and Roger Johnson were quick to praise their brave colleague for her professionalism.

Concerned for his co-star, Roger said: "Hopefully, somebody is standing by with a glass of water for you, Sarah."

Sarah replied: "That's exactly what I'm going to do!"

Nina was also impressed as she chimed in: "She came through it, well done, Sarah!"

She added "That is a true professional, she didn't cough all throughout but she was dying to."

Fans flocked to Twitter to air their concerns for the weather presenter during the broadcast.

One asked: "Hope you’re ok? So professional to continue."

Sarah herself replied: "Thanks! I usually manage to hold off a cough till the end of a broadcast but just not today."

A second said: "#bbcbreakfast Get the poor lass a glass of water."

A third commented: "Haha the poor weather woman get a drink #bbcbreakfast."