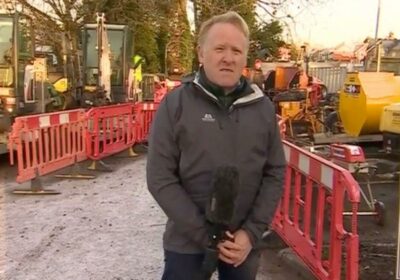 BBC Breakfast's roving reporter John Maguire wasn't holding back during Wednesday's instalment of the morning programme, as he made a savage dig at the show.

John was out in the community watching Christmas trees get recycled as the festive season comes to an end, and couldn't help reminiscing with Sally Nugent and Jon Kay in the studio about a similar report he'd done in the past, watching potholes get filled.

And John couldn't quite decide which was more exciting.

The segment began as Jon and Sally discusses twelfth night, and when the best time to take down decorations is.

Sally introduced the live segment by saying: "John is going to show us, and we should assure you that no Christmas fairies have been harmed in the making of this next item, have they, John?"

John then struck out at the programme as he replied: "No! I think, Sally, this is going to be the most exciting thing I've worked on since we saw a pothole being filled live on Breakfast one morning. That was pretty cool.

"Yeah, Christmas tree recycling." He went on to explain that the process was raising money for a local charity, before viewers got to see a Christmas tree being fed through the mulching machine.

But John's savage assessment of the exciting segment wasn't over, as viewers were treated to a view of the chipping machine.

He added: "He's just going to feed it through – it gets very, very loud, which is why I'm keeping my distance while still talking!

"This is, of course, live television. The red light at the front of the camera makes all sorts of strange things happen!"

John went on to conduct an interview with one of the volunteers, admitting: "A great cause, obviously, and a good thing to do. Good green credentials, raising money for charity, and it's a thing that other charities can pick up and do right up and down the country."

He couldn't resist adding in a cheeky Shakespeare reference: "I just want to very quickly credit Will Bachelor with my end line, which is going to be to say that there's so much orbiting you, Dan and Sally, about Twelfth Night – Will is telling me this should be 'Mulch Ado About Nothing'."

Back in the studio, Jon Kay was keen to join in with the teasing, as he joked: "That made it far better than your pothole filling report a couple of years ago! That was epic, thank you very much indeed.

"Christmas is definitely over, isn't it?"

BBC Breakfast airs daily from 6am on BBC One.