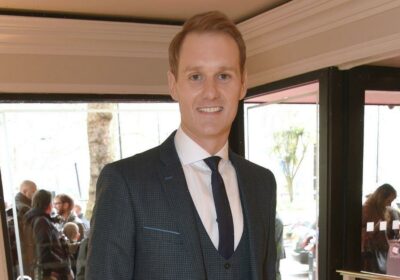 Dan Walker could have found himself in the dog house with his wife after he accidentally admitted his love for his new replacement.

The former BBC Breakfast host took to Twitter to hail "predictive text" for the awkward mishap as he exposed the message he'd sent to his wife.

More recently Dan, stepped down from his six year long role with the programme to tackle a new challenge with Channel 5 – with regular Jon Kay stepping up to fill his post.

It appears there are no hard feelings between the pair, with Dan even going as far as declaring his feelings for Jon instead of his wife, Sarah Walker.

Sharing the hilarious exchange with Sarah – who is the mother of Dan's three children – he included the caption: "Definitely up there as one of the most awkward messages I've ever sent to my wife."

He added a number of crying with laughter emojis and the hashtag "predictive text".

The text read: "Ten minutes away.

Realising his mistake, Dan backtracked with a follow up message: "Not John….You."

Many of Dan's adoring fans were left in hysterics as they each in turn left an abundance of quips and laughing face emoji's within the comments section.

Dan's former co-star Jon, was left flattered that he'd seemingly appeared in the exchange and took to Twitter to also get in on the banter.

The Strictly Come Dancing star had been a firm fixture on the BBC Breakfast since 2016 but had a lengthy career with the broadcasting giant for 13 years.

Since Dan's departure in May, eager fans were left in limbo with who would step up and fill his boots after his exit.

Viewers were left waiting until July, when the bombshell announcement landed, it read: "We are delighted to announce two new appointments.

Following up and sharing his excitement, Jon retweeted the news, adding: "So delighted to share this news and join the outstanding BBC Breakfast team full time.

"An absolute honour to front the UK's number one morning show with my mates Sally Nugent, Naga Munchetty and Charlie (and his new cat.