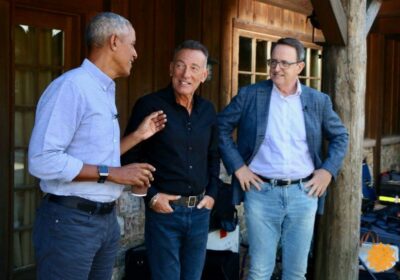 Two friends sat around and talked about the usual guy stuff on CBS Sunday Morning today. The big deal was that it was former President Barack Obama and superstar rocker Bruce Springsteen.

But they still came across as two guys.

In one segment on Springsteen’s 1960 Corvette, Obama enthused that getting a chance to drive “this mean machine” was one of his highlights of the interview. But the two-seater left no room for one key element of being an ex-president.

“Yeah, I just took off, and in the rearview mirror I could see some of my agents running behind!” Obama laughed.

The interview was done to support a new book, Renegades: Born in the USA (Crown). The book and its companion podcast stemmed from a couple days spent at Springsteen’s N.J. farm. Part 1 aired today on CBS Sunday Morning, with Part II set for Monday morning on CBS Mornings.

The friendship between the two men started in 2008: “Bruce Springsteen decided to charitably help out some not-very-well-known new U.S. senator who had the audacity to run for president,” Obama said.

Over time, that friendship deepened, a friendship Obama once characterized like so: “I am the President. He is the Boss.”

“I think Bruce, through his music, I tease him about how much better it is being a rock ‘n’ roll star than being a politician,” Obama said.

“Which of course it is!” Springsteen said, laughing. “You do have the better deal,” Mason said.

“He does not really deny it!” Obama said. “There is a certain sense of ministry to Bruce’s music. And his body of work is around these issues of, you know, ‘Who are we?’”

Watch a clip from the interview here.