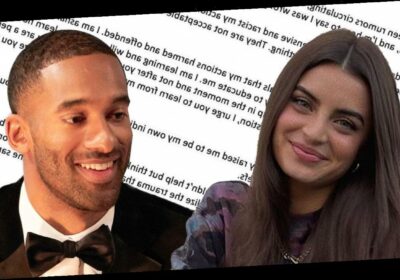 Rachael Kirkconnell is opening up about the racism controversy that has embroiled both her and The Bachelor franchise. Kirkconnell took to Instagram on Thursday where she shared a video message about taking responsibility for her actions and being accountable to work toward social change and justice.

After explaining that she’s been contacted by people who have both criticized her and others who don’t understand why she’s facing heat at all, Kirkconnell said she decided to speak out about the need for everyone to confront systemic racism and injustice.

“I think that the first big step in all of this is white people stepping up and taking accountability,” she shared. “Things will never change if we don’t all work together, and work toward this racial progress and this unity that we all want.”

Kirkconnell said that she had long debated in her head whether or not to post links and information regarding resources for others who wish to educate themselves on racial injustice in America, but was worried how it would look.

“I don’t want people thinking that it’s performative or that it’s not something that I truly stand by,” Kirkconnell shared, adding that she understands why people were hurt and upset by things she’s done in the past, and how she’s handled this controversy.

“I hear you. There are things out there that completely validate your opinions and your anger towards me,” she said. “But I’ve come to realize that sitting aside and hiding in the corner, to avoid being called performative, it doesn’t help anyone.”

Kirkconnell also issued a powerful rebuke of commenters defending her past actions and asked them pointedly to stop weighing in.

“If you are in my comments, or defending me anywhere, telling people that I did nothing wrong, that there’s nothing to be hurt about or nothing to be angry about or offended about, please stop,” she said. “That’s not our place to tell people what they can be or can’t be offended about. That’s wrong. And that’s part of the problem.”

“Please stop saying I did nothing wrong, because that’s not true,” she continued. “If you really want to support me, then encourage me to do better and encourage those around you to do better and accept change… because we need to work together if anything is going to change.”

The post comes almost two weeks after longtime Bachelor host Chris Harrison announced on Feb. 13, in his second apology for defending Kirkconnell’s racist actions, that he’d be taking time off and would not be hosting The Bachelor‘s upcoming After the Final Rose special with Matt James and his final pick.

In an interview with Rachel Lindsay on Feb. 9, Harrison defended the Bachelor contestant’s past racist actions, and encouraged people to offer her “grace.”

In a statement on Instagram on Feb. 11, Kirkconnell apologized, and said she hoped to “earn your forgiveness through my future actions.”

That apology came one day after Harrison issued his own statement, apologizing for “wrongly speaking in a manner that perpetuates racism” by defending Kirkconnell’s racist actions and asking people to offer her “grace.”

Many fans continued to speak out against him, while nearly all the contestants on James’ season — including Kirkconnell — shared a post condemning “any defense of racism.”

In a follow-up statement on Feb. 13, Harrison revealed he’d be stepping away for a “period of time.”

“By excusing historical racism, I defended it. I invoked the term ‘woke police,’ which is unacceptable. I am ashamed over how uninformed I was. I was so wrong,” he continued in part, before sending a message to the Black and BIPOC communities.

“The historic season of The Bachelor should not be marred or overshadowed by my mistakes or diminished by my actions. To that end, I have consulted with Warner Bros. and ABC and will be stepping aside for a period of time,” Harrison wrote.