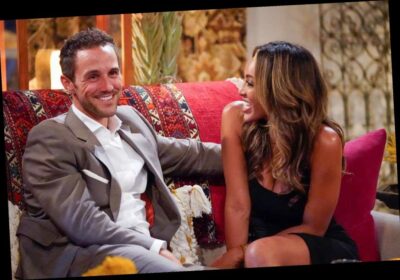 Tayshia Adams and Zac Clark will be tying the knot — just not yet.

The couple, who got engaged at the end of Adams' season of The Bachelorette last year, are focusing on dating each other at the moment, she told Marie Claire in a recent interview.

"We're dating right now while being engaged," Adams told the outlet, adding that she's "not at all" thinking about ending the relationship despite frequently being asked if they are still together.

As for the wedding date, the reality star, 30, said she and Clark, 37, go "back and forth" on when their nuptials should be. "At first, Zac was the person to be like, 'We could get married next week.' And I was like, 'Slow your roll. I'd love to date a year,'" she says. "And now I'm like, 'You want to … maybe next month?' And he's like, 'Tayshia, slow your roll.' We're back and forth. But there's no timeline. It's definitely going to happen. I just don't know when."

She also acknowledged how fast their relationship moved due to the nature of the show — the pair have been engaged for about five months and living together for three.

"It's not a normal relationship," Adams said. "We do bicker and fight, but 99 percent of it is good." Earlier this month, Adams appeared on an episode of Better Together with Maria Menounos and told the host that she and Clark "definitely" want to have kids together at some point.

"I said I wanted five on the show, but now I'm down to four. I lost one because I started thinking about it and that would require me to have one set of twins and that's just a lot of work," she said. "I don't know. Whatever God gives me, I'll be happy with."

Adams added that for now, she's focusing on living her "best life" with her fiancé after relocating from Orange County, California, to New York City, where he lives.

"I've been living there for the past month and, you know, I thought it was going to be a really hard transition because I'm an Orange County girl, but honey, I am officially a New York City girl!" she said. "I love it so much."