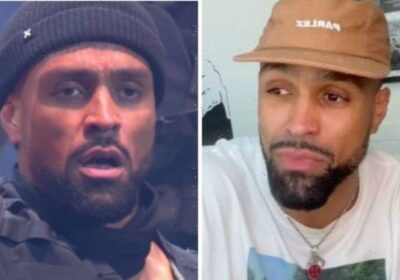 Jim Davidson storms out of interview with Ashley Banjo

Diversity, led by Ashley Banjo, performed during the Britain’s Got Talent semi-finals in September 2020 made national headlines for their BLM inspired dance. Their touching performance included the impact of coronavirus and the death of George Floyd at the hands of American police officials, which lead to the Black Lives Matter Protests. Broadcasting watchdog Ofcom received over 24,000 complaints from viewers of the programme and left the members of the group receiving negative comments from viewers. In an exclusive chat, Ashley admitted he still receives negative comments about the dance over a year later.

Once again, Ashley Banjo has taken 11 famous faces for the Real Full Monty performance, as they strip off in awareness for cancer.

Speaking to Express.co.uk and other press on the positive comments they have received from people impacted by the show, Ashley said: “I went through a wave of only getting negative, even now.”

Co-star and professional ballroom dancer James Jordan was shocked by the revelation and asked: “Do you still get it now?”

“I just get a lot of it, do you know what it is, it’s not that there’s more negative, it’s just the positive people say their support and they do their thing.

“Negative people, they just wait, the same person will tweet the same thing 10 times but walking in here and doing this,

“It’s all those positive experiences that makes it genuinely worth it, sometimes you get bogged down in social media, but doing this show the response on social is always amazing, and it’s one of those show I love doing.”

Ashley went on to speak about how dancing impacts him and the reason he loves taking part in the show: “I know as a dancer and performer using what I do, I process loads of things.

“So, with this, what I see is everybody sort of taking their experience their pain, their grief and their worry and we are turning it into something that the goes out and affects people.

“Genuinely, I say it all the time I still get messages saying thank you because the show made me check and save my life, my husband, my wife it makes it so worth it.”

The dance group sparked divided opinions with their routine, which referenced the death of George Floyd in America.

Viewers threatened to boycott the programme after Diversity’s dance, which they said shouldn’t have been on the family show.

The routine also featured backing dancers dressed in riot gear while the group also took the knee during it.

After receiving more than 24,000 complaints, broadcast regulator Ofcom said it believed the performance did not raise any issues that warranted an investigation.

The regulator said: “Ofcom received approximately 24,500 complaints about the above programme.

“Complainants outlined a range of concerns about Diversity’s performance, including that the themes of violence and racism were inappropriate for family viewing, that it expressed support for the political organisation ‘Black Lives Matter and that it was racist towards White people.

“In our view, Diversity’s performance was an artistic expression of topical social issues and did not contain any content which was racist, unsuitably violent or otherwise inappropriate in the context of this programme.”

Strictly The Real Full Monty episode one is available to watch on ITV Hub, with the second episode airing tonight at 9pm on ITV.