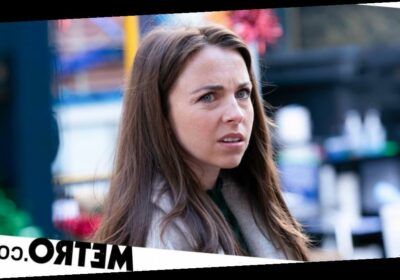 She certainly isn’t the first character to concoct such a devious scheme. The fake baby bombshell has become a soap trope over the last few years; with several ladies resorting to extreme measures to trick the men in their lives.

Abi (Lorna Fitzgerald) announced a baby was on the way to keep boyfriend Ben Mitchell close, despite knowing he was gay. Taking toxic advice from Babe Smith, Abi slept with Lee Carter, then lied that she had suffered a miscarriage when this didn’t result in a pregnancy. When Ben discovered the truth, he humiliated her in the Queen Vic.

Belle (Eden Taylor-Draper) claimed she was expecting a baby by her married lover – and local doctor – Jermaine Bailey to stop him moving away. She used one of Charity’s scan photos as part of her deception, but the truth soon unravelled in front of Belle’s horrified family, after which her mental health took a turn for the worse.

When Eva (Catherine Tyldesley) saw evidence of her fiancé Aidan’s affair with Maria Connor, she was distraught and furious in equal measure. She told Aidan they were having a baby, planning to wreak revenge on their wedding day. Eva had a change of heart when Aidan decided to be honest, but Maria exposed her lies during the ceremony.

Zoe (Michelle Ryan) was dating Dennis Rickman, but he was in love with his adoptive sister Sharon. Den Watts suggested that Zoe should fabricate a pregnancy, then offered to turn it into a reality by sleeping with her. But Dennis walked in on them in bed together, thankfully bringing this grim plot to a quick end.

After her relationship with Andy Sugden turned sour, Kerry (Laura Norton) blurted out that she was having his baby. In a disgusting attempt to convince him, she stole the positive test and urine of a pregnant woman to pass off as her own. But after being involved in an accident, Kerry finally admitted there was no baby.

Mercedes (Jennifer Metcalfe) began an affair with Carl Costello while in a relationship with his son Riley. When Carl’s son Seth found out, she claimed she was pregnant to keep him quiet. However, after a fall, Mercy ended up in hospital where it was revealed she really was carrying a baby – and a ‘who’s the daddy’ plot emerged.

Insecure over her fragile relationship with Nick Tilsley, Natasha (Rachel Leskovac) had a termination in secret, then claimed she was still pregnant. Gail knew something wasn’t right and checked her medical records, before telling Nick the truth. Ten years later, it was revealed Natasha was carrying another baby when she left; and she returned with their son Sam.

Elly (Jodi Anasta) told husband Mark Brennan she was expecting – only to find out her test was a false positive. Elly failed to explain this, even using a scan photo of the baby Mark lost as her own. She had a one night stand and got pregnant for real, but later admitted the truth, ending their marriage.

Sly Sienna (Anna Passey) wanted a family of her own, so went to excessive lengths to steal Nancy Osborne’s ready made one. Announcing she was pregnant after an affair with Darren, she made a deal to take the baby of another expectant mother.

Several months later Sienna’s lies, including a fake baby bump, were revealed in the packed pub – and her elaborate scheme remains one of the most memorable in soap.