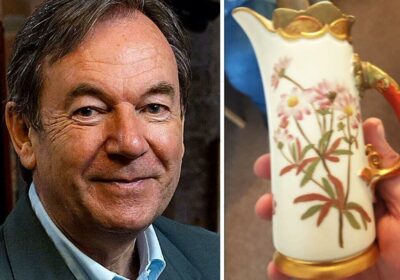 Earlier this year, Antiques Roadshow stalwart Eric Knowles invited readers to send him pictures of their collectables, and scores of you wrote in with snaps of car boot sale finds or bequests from loved ones. 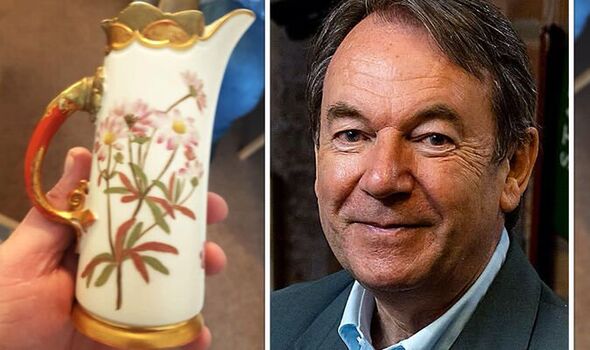 There was superb Chinese pottery, elegant tea cups and delicate vases, but after sifting through them all, the BBC ceramics expert has chosen his favourite pieces. And the pick of the bunch, he decided, was Hannah’s perfume bottle.

Some of its secrets probably died with the original owner, but Eric was certainly able to unlock more than expected.

A mysterious inscription carved on one end of the bottle reveals that it was a special present from H.S. to B.G., but Hannah has no idea if it was a romantic gift or who the original recipient was.

The bottle was left to her by her grandmother Cherry Mawer, who passed away last year aged 87.

After close scrutiny, Eric said: “This English ruby glass double-ended scent bottle was probably made in Stourbridge in the West Midlands in about 1880 and would have had the mounts added in Birmingham.”

When Hannah examined the bottle more closely she discovered the date of October 16, 1880, which means he was spot on. 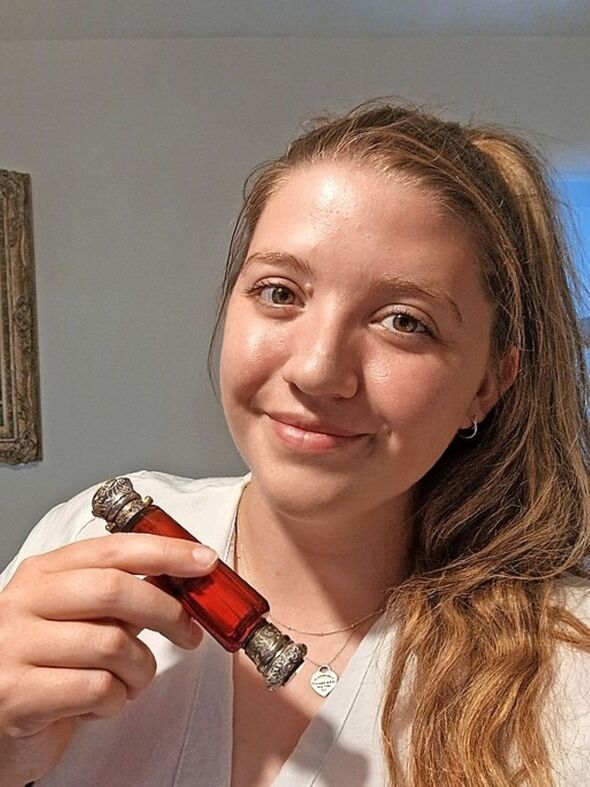 Eric added: “The engraved initials of both the giver and receiver add a warm sentimental connection. Such a gift would probably have been given in its fitted leather case and would have cost serious money at the time. But the vast majority on the market now lack their original cases.

“Scent bottles of this type are of dual purpose. They contain both perfume and smelling salts, often in a small sponge. Both were thought essential for a refined lady to not only smell sweet but also, in an age of tight corsetry, to be revived if she fainted.

“Similar panel cut examples were also made in clear, blue, amber and green glass but ruby examples tend to be more desirable and, if hallmarked silver, tend to sell for around £150.”

For Hannah, 26, of Witney, Oxfordshire the value is not important as she has no intention of selling. It is the connection with her grandmother that she treasures.

“My granny Cherry used to keep it in her bedroom and it always interested me,” she says. “I wished I had asked her more about it when she was alive.

“Her mother Ann joined the Queen Alexandra nursing service. She was an Army nursing sister through the Second World War and went to live with her father’s uncle Fred, a rector at Tyneham, Dorset.

“The bottle was a gift from his niece, Phoebe. She was an interesting character. Her full name was Gertrude Phoebe Meiron Rees, OBE. She was a well known playwright in her day. I don’t know where Phoebe got the bottle from but I would like to know.

“Eric has been very helpful but I want to know the full story and the identities of those on the inscription. He is right about the smelling salts. When you open it you can still smell them. I have the bottle on display in my lounge. I just love it.”

Other collectables that stood out to Eric, who also appears on Bargain Hunt, included a Royal Worcester jug. Retired chef Barry Lupton, 73, of Nottingham, sent in pictures of the jug, which belongs to sister in law Alison Lupton.

The antiques expert recognised it as a type of ceramics that comes under the “Blush Ivory” banner of decorative wares made during the late 19th and early 20th century.

“This would appear to be quite apt for this jug,” said Eric, “as the actual form emulates an ivory tusk section and is a classic shape that appealed to the Victorian fascination for all things novel.”

“The base is printed with the Worcester trademark, which was first introduced in 1862 when the company traded as the Worcester Royal Porcelain Company and made the subtle change to Royalthought in the age Worcester England in 1891. 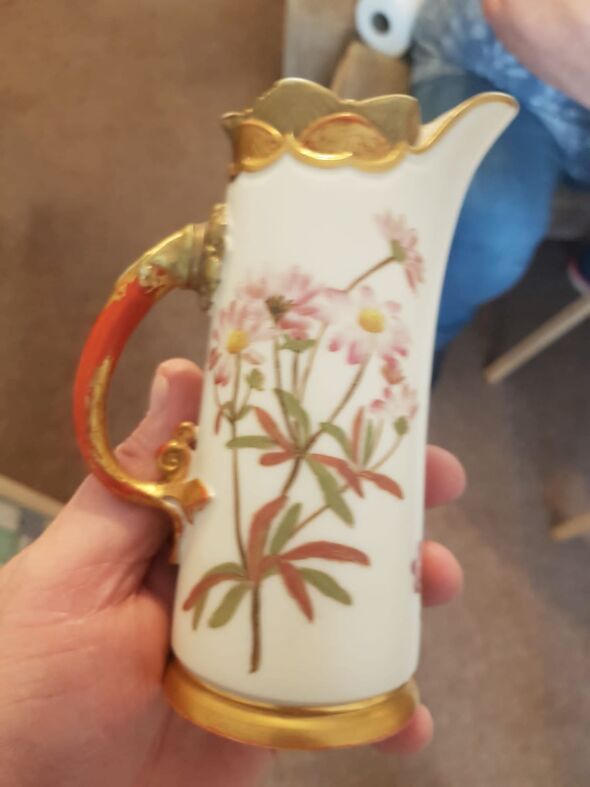 The addition of England was to comply with the demand of US President William McKinley that all goods entering the United States declare their country of origin that same year.

This jug bears a small letter “a” below the trademark, which is the factory date letter for 1890 whilst the registration number 74149 places the design being entered in about 1889, preventing other potteries using that shape for a three year-period.

Eric says: “The initials in puce, PB, are those of a decorator responsible for the painted floral decoration, albeit added to previously black printed outlines, whilst the gilding would have required a third and final firing in the kilns.

“Sorry to relate that Blush Ivory wares appear to have fallen out of favour in recent years plus your example appears to show extensive wear to the handle but at least it is a worthy survivor and consequently worth about £60. It would be nearer £100 if in mint condition.”

Barry said: “We all like the jug very much, so it is great of Eric to give us some more of its history. My sister-in-law inherited it and it will stay in the family.”

Pictures of a spirit barrel from the early Victorian era sent in by another reader also caught Eric’s eye. “I often wonder if pots could talk what stories they might tell,” he says. “And this three gallon stoneware spirit barrel, having graced a British pub since about 1840, could surely tell a tale or two. 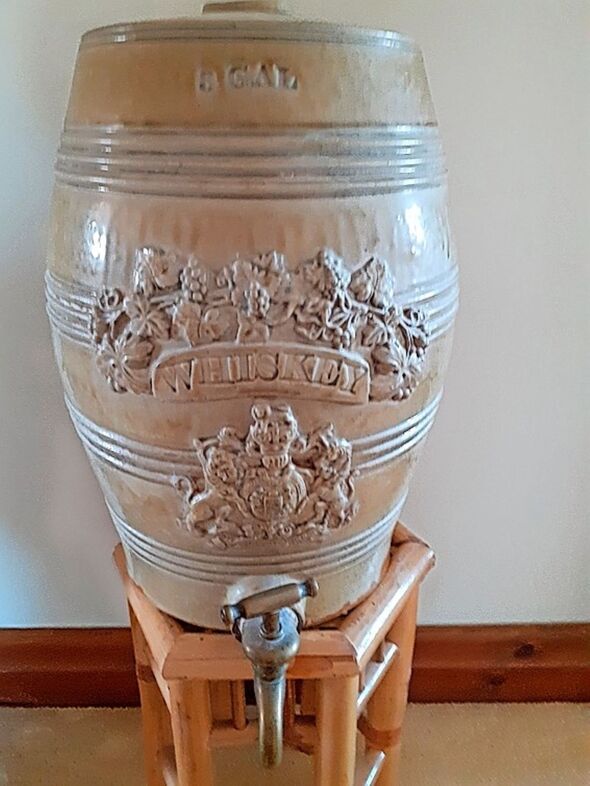 “I have personally bought and sold several such barrels over the years but of a much da pa ha ap darker type due to being salt-glazed. This paler example is of a lead-glazed type. It still has its metal tap, known as a spigot, and appears to be in good order.

“Stoneware spirit barrels were made in several regions but the major centres tended to be Lambeth and Chesterfield and I am left wondering if this example bears a maker’s mark.

“The big attraction for me is the splendid and sizeable applied royal coat of arms, supported by a dramatic lion and unicorn, whilst the actual royal arms feature a central escutcheon moulded with arms including a racing horse emblematic of the House of Hanover.

“This was officially removed in 1837 as Queen Victoria, as a woman, was unable to succeed to the throne of Hanover under Hanoverian Law.

“Some potters were relatively slow in changing their decorations. Three gallons is quite an unusually large size compared to the usual offering on the present day market whilst collectors tend to favour the saltglazed examples.

“However, this example is labelled “whiskey” rather than “whisky”, suggesting it was intended for Irish spirits rather than Scottish, which might add to its appeal. Whatever your tipple I would expect to pay about £150, but more with a maker’s mark.”

Eric was particularly taken with photos of a Cartier watch which were sent in by reader Trevor Horsfall. If it turned out to be the real deal, it could be worth thousands of pounds.

“I was intrigued to see the word Paris written on the face as well. You don’t often see that.

“This is the one case where I am really not sure what we have got. I would like to speak to a colleague with more expertise than me. It would also be good to see this watch and have a close look at the markings on the back. If this is a genuine Cartier watch it would be a tremendous car boot sale bargain.”

And finally, Eric went for the 1880 silver-plated egg warmer sent in by Kay Skinner. “This egg coddler would have made a smart addition to any Victorian breakfast table with dishes and covers of the same period,” he says.

“The marks on the underside of the base are often mistaken for silver hallmarks. Makers’ initials W B & S are probably those of William Batt and Sons of Sheffield who were in business from the 1860s until the 1930s.

“Chances are that it might still be functional – so if you prefer your eggs boiled and hot then an egg coddler like this three spirit is well worth bringing out of retirement. Victorian silver plate is often available at significantly lower asking prices than hallmarked silver. I would place the value of this egg coddler to be in the region of a reasonable £60.” 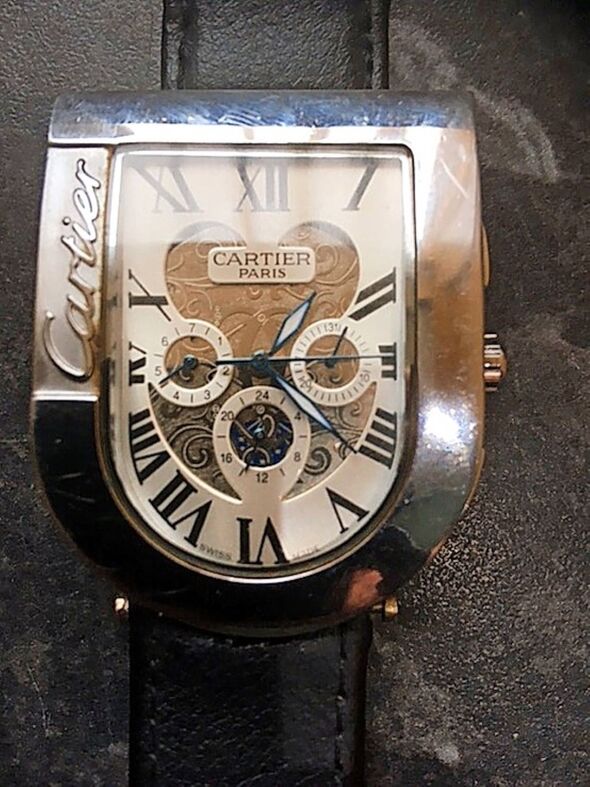 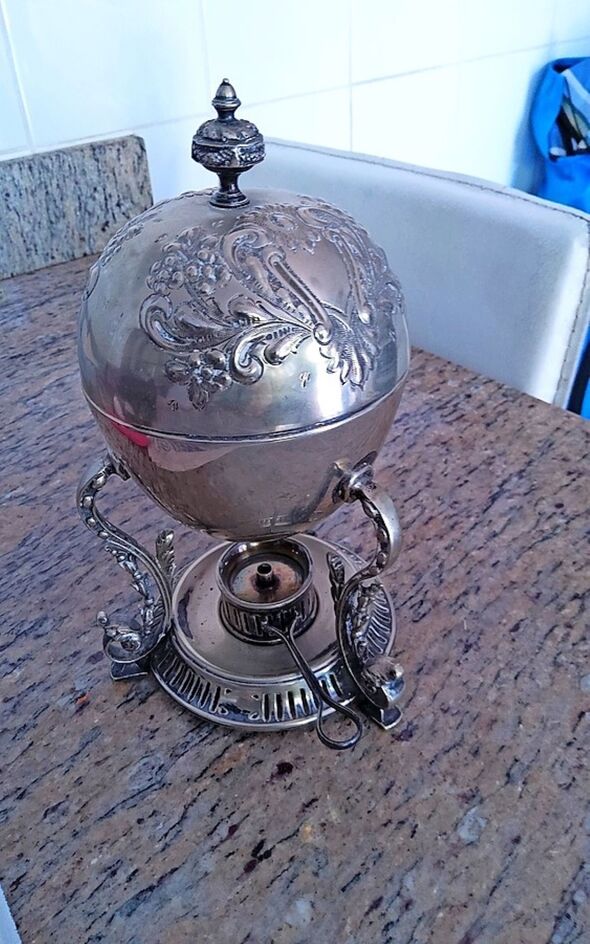