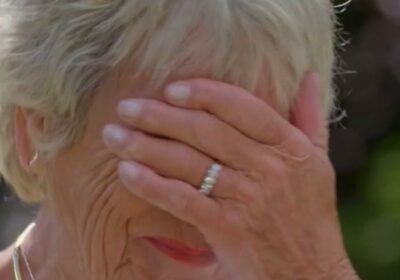 Antiques Roadshow left professional tennis player Elizabeth James in tears as she reminisced over her career when having her Wimbledon dresses valued.

Liz, who featured as a guest on a recent episode of the BBC program, presented expert Hilary Kay with a dress embroidered with the Prince of Wales feathers as the show stopped off in Dyffryn Gardens near Cardiff, South Wales.

People poured in with ceramics, musical instruments and a Windrush travel chest.

But Hilary was left lost for words when she came across guest Liz James, and the tennis dresses she wore in matches alongside Anne Jones.

Meeting Liz and being intrigued by her items, Hilary began: "Surrounded by these manicured lawns, it almost feels as if we are at Wimbledon centre court, and that is a place that you know well."

Liz agreed: "I do, Hilary, I know it really well, having played for fives years, I feel very blessed that I had a wonderful time."

Wanting to know more about Liz's Tennis career, Hilary asked: "When did you first appear as a tennis player at Wimbledon?"

Stunned at her successful career, talk soon turned to the dresses Liz had brought along: "Wow, now are all of these yours?"

Liz explained: "Two are not, the two that aren't are the one in the middle and the one on the table, and they belong to Anne Jones, she gave them to me."

Hilary continued: "I suppose the name we think of for dresses for women in tennis (is) Teddy Tinling. He rose to fame in a rather flamboyant way in the late '40s when he created a dress for a Tennis player which was quite short but had a pair of really frilly lacy knickers under it.

"And of course, every time she moved, you could see the knickers, she was known then a gorgeous gussy, wasn't she?

"And, of course, the paparazzi were taking pictures of her knickers, and I am pleased to say that you have got a pair!"

Hilary went on to ask Liz if she had any input in the design of her dress which had the Prince of Wales feathers embroidered on it.

Liz explained that Teddy had approached her when she was accepted into Wimbledon and wanted to design her a dress to celebrate Prince Charles becoming the Prince of Wales.

She also stunned Hilary when she revealed that none of them paid for the dresses as they were chosen personally by Teddy.

Hilary exclaimed: "That is remarkable, when you look at this does it bring it all back?"

Becoming emotional and hiding her face, Liz broke down: "I have to say it has now."

Supporting Liz, Hilary said: "Well, it should, it was a fabulous time, it seems almost a crime to put a value on them, but I will, I will charge through.

"The value of tennis dresses is not huge, I would have said the most valuable one is going to be the Prince of Wales feathers there, that would be about £200 to £300.

"The rest of them, and including perhaps the ones that we are not looking at here, I would we would be talking about £800 to £1000 for everything, and it couldn't be a better day!"

Grateful for Hilary's expertise, Liz thanked her: "I am just so thrilled to have seen them and have them all out like this, it has just been a pleasure.

"They are certainly not going anywhere! They are probably going to be put into frames for my grandchildren, I think that is what I would do."