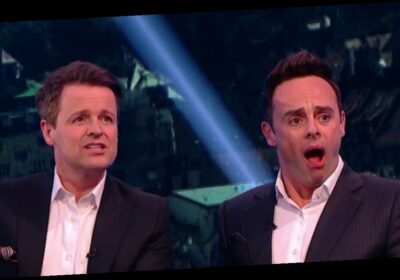 Ant and Dec's Saturday Night Takeaway has been sweeping in record ratings this year, but it hasn't stopped a wave of complaints from viewers.

Ofcom recorded 96 complaints last week, with many viewers taking issue with a joke Ant McPartlin made about Declan Donnelly's height.

Some of the complaints also concerned the racy nature of an innuendo that had been slipped on the show.

Even though Saturday Night Takeaway has been hit by complaints, Ant and Dec's friendship is as strong as ever, according to facial expressions' expert Adrianne Carter.

Adrianne, also known as The Face Whisperer, spoke exclusively to Daily Star to discuss their interaction in the offending scene.

Having watch Ant poke fun at Dec's height, Adrianne confirmed there was no "annoyance" between the pair, whose friendship goes back decades.

Adrianne said: "It is very obviously scripted as all the facial expressions are posed rather than genuine from Ant and Dec.

"It looks like that they have purposely made Dec look smaller in the bit where Ant says about 'everything is bigger than him'.

"I think this is a scripted piece rather than a genuine insult and Dec seems okay with playing along with it. I don't see any signs of distress or genuine annoyance."

Body language expert Adrianne also analysed the connection between the two presenters in the clip, picking up on their ease around one another.

She added: "They bounce off each other really well, the way only two old, genuine friends can do. There is an easy rapport between them.

"In my opinion, the bond is extremely strong and comfortable."

The scene aired on March 7, showing Ant and Dec team up with adventurer Bear Grylls for a tongue-in-cheek comedy sketch.

Titled Double Trouble, it saw the pair cowering in terror, before asking Bear: "Have you come to rescue us?"

"No, this thing is way bigger than you," Bear replied.

The script then called for Ant to make light of Dec's height, gesturing to his co-star and saying: "Well, everything's bigger than him."

In reality, Ant is only slightly taller than his Geordie BFF – measuring in at 5ft8, he towers over Dec's 5ft5.

Ant and Dec first met in their teens, getting to know one another backstage on the set of Byker Grove.

When they outgrew the kids’ show, the Geordie duo decided to give the world of pop a try, launching a music career as PJ and Duncan.

Riding the wave of success with their track Let’s Get Ready To Rhumble, they released three studio albums together, while simultaneously picking up jobs in TV.

Becoming household names thanks to CBBC’s The Ant and Dec Show and SMTV Live alongside Cat Deeley, they have been best mates for the past three decades.

And, if their body language is anything go by, they look set to enjoy many more years of friendship.

The series finale of Ant and Dec's Saturday Night Takeaway airs on Saturday at 7pm on ITV.