Home » TV & Movies » 'Annette': Why Leos Carax Wanted a Puppet in the Film

'Annette': Why Leos Carax Wanted a Puppet in the Film 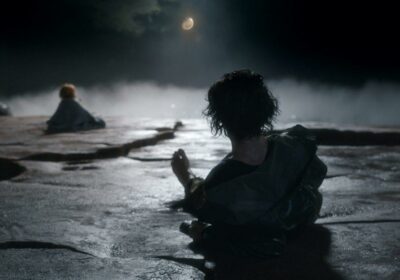 Annette is a rock musical from director Leos Carax starring Adam Driver and Marion Cotillard. The film follows a cynical stand-up comedian, Henry (Driver), who falls in love with an opera singer, Ann (Cotillard). Together they share a child, Annette, who happens to be a played by a puppet. Find out why a fake baby was used in Annette and the symbolism behind it.

[SPOILER ALERT: Spoilers ahead for Annette.]

What is ‘Annette’ about?

Annette debuted at the 74th Annual Cannes Film Festival in July 2021. The rock tragedy features music from brothers Ron and Russell Mael, who perform as the band Sparks. Through song and dance, the tragic tale of Henry McHenry, Ann, and baby Annette unfolds.

After Henry and Ann marry and have a child, they begin to grow apart. Slowly, Henry’s career starts to collapse. As Ann begins to notice, she starts having premonitions about her husband until eventually, he becomes unhinged.

In the wake of Ann’s death — which happened as a result of Henry’s negligence — Annette becomes her mother’s prodigy. She inherits Ann’s vocal talent and ability to woo crowds worldwide. With Henry her sole caregiver, he starts exploiting his daughter until she reveals Henry’s dark side to the world.

The ‘Annette’ puppet is based on a real girl

According to The Washington Post, the “fiery-haired puppet wasn’t meant to look like the actors, but her overall spirit was inspired by a young girl Carax knew.” If a real person inspired Annette, why not have a child play her?

Carax’s reasons for using a puppet are simple. “I wanted her to be live, and she couldn’t be a real little girl because you can’t find a little newborn who can sing,” the director explained to the Los Angeles Times. So, Carax searched far and find for the right puppeteer to bring his vision of Annette to life.

“Too much realism might have given rise to that uneasy feeling described in theories of robotics as the ‘valley of the uncanny,’” Charlier explained. “When too perfect, an imitation of the human ends up creating a somewhat repulsive reaction. Annette, on the other hand, had to be instantly endearing.”

As technical designer Romuald Collinet explained, the Annette puppet needed to “inspire tenderness and empathy.” Ironically, that same tenderness would need to translate to the real girl who appears in the final scene.

Puppet Annette becomes human in the final moments of ‘Annette’

In the final scene of Annette, Driver’s character sits in prison for murder. He gets a visit from his daughter, who enters the visiting room as the puppet version shown throughout the movie. But eventually, Annette becomes human, played by Devyn McDowell.

Together, Annette and Henry sing “Sympathy for the Abyss.” With nods to Henry’s stand-up routine from the beginning of the film, the song serves as a full-circle moment for the father in so many ways.

Annette is the only thing Henry has left to love, but she is unable to love him, nor her dead mother. “Forgive you both, or forget you both,” Annette sings as she confronts Henry, cuddling the monkey doll she has had since birth — another nod to Henry’s act as “the Ape of God.”

“I must be strong,” Annette concludes as Henry whimpers “goodbye.” As she abandons her father in prison, Annette leaves behind her doll form for him to love.

Annette is in select theaters and streaming on Amazon Prime.