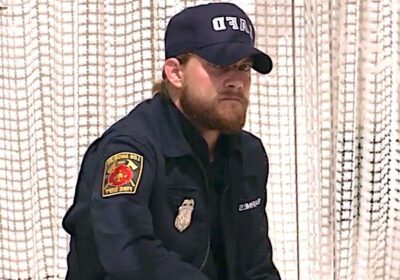 In Sunday’s Animal Kingdom, everything that could go wrong with the Codys’ jewel theft seemed to — but only to me. Smurf’s boys appeared to think that the heist was a rousing success.

To be fair, the guys did make off with apparently all but one of Eddie’s sky-high-priced baubles — the one that Brock gave to girlfriend Tiana. After Deran gained access to the party by donning his fire marshal costume, Pope snuck in as a plumber and left the counterfeit pieces for him in the toilet tank. Then, while “paparazzo” Craig created a disturbance on the lawn by getting himself run over by Brock, Deran switched out the real gems for the fakes and flushed the sparklers down the toilet, at which point they flowed through the sewer line to a waiting J and Pope. 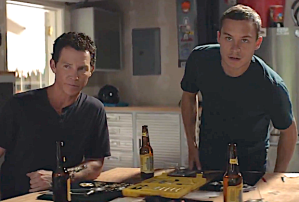 My questions are: Aren’t Deran’s prints all over the counterfeit jewelry that he left behind? Once the switcheroo is discovered, won’t the cops have no trouble matching the thief’s prints to ones in their system? Also, wouldn’t both he and Pope have been caught on a zillion security cameras? As notorious as they are, wouldn’t any detective easily make them? Finally, how many paparazzi pictures did Craig get himself into on that lawn? Wouldn’t Eddie eventually see them and recognize the “customer” who’d taken such an interest in his security system? Finally, given how unhappy Arthur wound up feeling about being involved, shouldn’t J be worrying that Eddie’s half brother is going to sell out his family?

In other developments in “Diamonds Are Forever,” off intel from Taylor, who was freaked upon realizing who the Codys were, Thompson snuck into Smurf’s old house and had a look around. (Key finding: Pope’s box of pictures of Lena and Catherine.) J and Deran struck a deal to act as “consultants” to Clark and Drew — for five percent of the haul from their 4814 Diner. Oh, and the newcomers had to start and host the Strand Surfing Competition. Deran and Craig, meanwhile, stopped throwing shade at one another and threw enough punches that blood was spilled. Pope went out on a limb and left a message for Amy. And in 1992, Baz stood up Smurf as she was working on a job with Billy to get it on with Julia.

So, what did you think of “Diamonds Are Forever”? Was I the only one who saw flaws in the execution of the jewelry heist? Are you hoping Amy calls Pope back or, for her sake, doesn’t? Comment away.